We all have calendars. There’s the regular Gregorian Roman calendar we all use. Then there’s the fiscal year calendar, the school year calendar, religious calendars… But of all the calendars man has come up with, which do you think God uses to plan prophecy and everything else He wants to do? The American calendar? The Chinese calendar? Or maybe the ancient Mayan calendar? Nope. None of the above. God uses the calendar He created for His people. And it’s in what we call the Bible. It’s God’s Prophetic Calendar, and it is the calendar He uses to help us understand when His Son is going to come back to rule and reign over this earth. 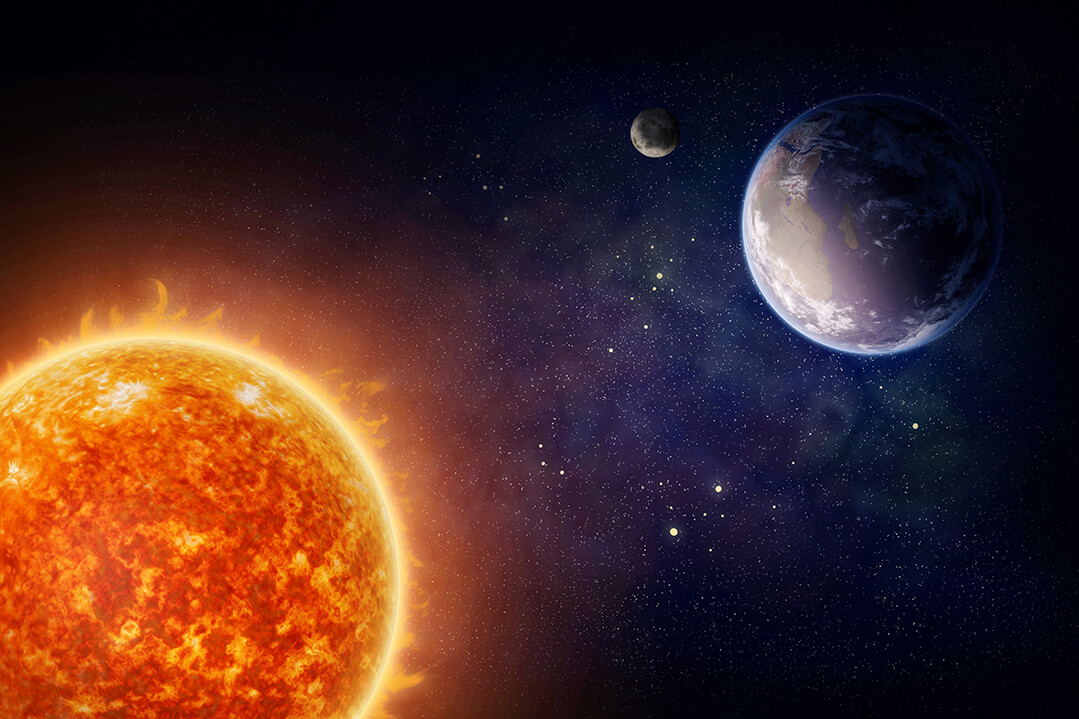 He’s not just guessing when and how His Son will come to redeem mankind. It was and is prophesied through His calendar on these specific holy days, called “moedim.” Although I’ve done extensive teaching on each feast day in a DVD series called God’s Prophetic Calendar, I would like to do a quick overview of the feasts in this short article. Let’s start by taking a look at the first time the word “feast days” shows up in the Bible:

Genesis 1:14 “Then God said, ‘Let there be lights in the firmament of the heavens to divide the day from the night. And let them be for signs and seasons, and for days and years.'”

Because we modern Bible readers tend to read into the text what we think certain words mean, we sometimes miss the real meaning of the original Hebrew. And this is certainly the case here. Although you may not see the words “feast days” in this verse, I can assure you they’re there. The word “seasons” here could easily be interpreted from our modern definition of spring, summer, fall, and winter. But that’s not possible, because when the earth was created, there were no such seasons. The earth was at a zero-degree axis at that time making the entire globe a tropical paradise. The word “seasons” here is the Hebrew word “moedim.” A biblical “season” is, as Strong’s Concordance says, “an assembly, an appointed time, a festival, congregation, a sign, a season.” God created the sun, moon, and stars as heavenly markers so that mankind would know when to get together to celebrate and worship Him. Just like we humans have special days (anniversaries, birthdays, etc…), the Creator also has appointed times for His people to get together to feast and worship Him. These times are called the Feast Days of the LORD. These are the “seasons” of the Bible.

The seven feast days are split into two groups: the spring feast days and the fall feast days. The spring set is composed of Pesach (Passover), Unleavened Bread, Yom Bikkurim (First Fruits), and Shavuot (Pentecost) and is all about the First Coming of the Messiah. The fall set includes Yom Teruah (the Feast of Trumpets or Rosh HaShanah), Yom Kippur (the Day of Atonement), and Sukkot (the Feast of Tabernacles) and is all about His Second Coming. But every single one is all about Jesus the Christ, Yeshua HaMashiach in Hebrew. He could not have died in July, or on St. Patrick’s Day, or on Halloween. Why? Because God goes by His calendar and the feast days His people have been celebrating for thousands of years. They were a rehearsal that would point to when the Bridegroom would actually come. Yeshua died on Passover, was put into the grave during the feast of Unleavened Bread (when every Jew was removing leaven (sin) from their houses), rose at exactly the same moment that the high priest was waving the first fruit barley offering and asking Yahweh for a great harvest in the fall, and the Holy Spirit came down on Shavuot (which just so happened to be the same day 1200 years earlier on which all of Israel received the Torah on Mount Sinai). Coincidence? Nope. He is fulfilling His prophetic Word on His calendar. Learn the calendar, you learn more about Him and His ways. Ignore the calendar and just follow the traditions of men and you will be left guessing.

The First Coming revolves around the Spring Feast days. He fulfilled each one to a tee and showed us that these feast days are the days He is using for His prophetic calendar. By these, we will know the “season” that He will come back the second time. But wait a minute. I thought that no man knows the day or the hour? Well, let’s take a look at that through this new lens.

1 Thessalonians 5:1-2 “But concerning the times and the SEASONS, brethren, you have no need that I should write to you. For you yourselves know perfectly that the day of the Lord so comes as a thief in the night.” (Emphasis mine)

Did you catch that? Remember, these are Hebrews who are writing these letters and defining things from their Hebrew background and the only scriptures they had at the time, what we call the Old Testament. So Paul says here that he doesn’t have to tell them in what season the Messiah is coming back because they already know; they just don’t know the exact day or time. Amazingly, this verse has often been quoted as saying that no one can know when Yeshua/Jesus is coming back. But Paul goes on to say that He only comes as a thief in the night for those who walk in darkness. Take a look at verse 4:

1 Thessalonians 5:4 “But you, brethren, are not in darkness so that this Day should overtake you as a thief. You are all sons of the light and sons of the day.”

In Hebrew biblical thought, walking in darkness means not walking in God’s law or prescribed ways. David says that it is His law that is a lamp unto his feet and a light unto his path. When we learn and walk in the truth, there is revelation. God’s calendar is designed so that we are not taken by surprise. Paul says that if we don’t know the truth, then we are walking in darkness and His return will take us as a thief in the night. So let’s get back to the second set of feast days, the Fall Feasts of the LORD.

Where the First Coming revolved around the Spring Feast Days, the Fall Feast Days are all about the Second Coming. After a long summer break, which is prophetically connected to the last 2000-year drought of the Word of God and the absence of Messiah, the fall feasts finally arrive. And it all starts with the “sound of a trumpet.”

The first feast day of the fall is Yom Teruah, the Feast of Trumpets. Yom Teruah is the only feast day that is not centered on an event, remembering an event or a harvest ritual. In Hebrew, it simply means “the blowing.” His people are commanded to blow the shofar, or trumpet, just like they did standing at the walls of Jericho. We are not told why. We are just told to do it. In Judaism this holiday is called Rosh Hashanah and is the head of the new civil year. It falls on the new moon of the seventh Hebrew month (Tishrei). It is a very exciting day as it kicks off the rest of the feasts. This feast is the one at which the kings of Israel were traditionally crowned and it is during this time period that the “sound of the trumpet” will blast and the “dead in Christ will rise first” as the Messiah takes His rightful place as king of both Israel and the rest of the world. This is where what is traditionally called the “rapture” happens.

Over the next ten days, called the Ten Days of Awe, God pours His wrath out over mankind and then the holiest day of the year commences. This day is Yom Kippur, the Day of Atonement, where for thousands of years the high priest of Israel would go into the Holy of Holies and make atonement for both his sin and all the sin of Israel for the previous year. It was “Judgment Day.” This is the day when Yahweh will separate the sheep from the goats and the millennium will begin.

Five days later, when the light of the full moon is the brightest, the most exciting feast of the year, the Feast of Sukkot (Tabernacles), begins. It is a week-long feast that is celebrated by all of Israel. In the past, it was not only a celebration of the end-of-the-year harvest but was also a commemoration of the fact that God tabernacled with men in the Wilderness and the idea that our bodies were just temporary “tents” (which is what Sukkot means in Hebrew). As a matter of fact, the Feast of Tabernacles, which normally happens in our late September or October, is when our Messiah was actually born. Unfortunately, December 25th was the birthday of every pagan sun god of ancient civilizations and as the pagans began to convert to Christianity, they brought some of these customs with them and “Christianized” them. But that’s a whole other story. Sukkot is not only the birth season of Jesus/Yeshua, it is also representative of the Marriage Supper of the Lamb and is connected to the ancient Hebrew wedding celebration. This amazing holiday begins the Millennial reign of King Yeshua. Many people who celebrate these feast days will go camping with their family or congregation for a whole week.

In the end, the Feast Days of the LORD were created so that we would have the curriculum to teach our children about Yeshua throughout the year and can remember all the great things He has done and will do. They are the skeleton of the entire Bible to which the tendons, muscles, and ligaments are then added. They are the foundation of virtually everything in the Bible; everything wraps around them. The more we learn about them, the more the Bible will come to life. After all, if they are all about the Messiah and we want to know as much about Him as possible, then the more we learn about His feasts the more we are learning about Him!

In my next article, I will be sharing more about Yom Teruah, the Feast of Trumpets, and we’ll see what the scriptures say about this exciting feast of the Lord.