In the last article we discovered that faith and works are really two sides of the same coin. We can now understand why James can say in his own book that “faith without works is dead.” We conceded that understanding “works” for God is not that difficult. It’s simply doing what He said because we love Him and want to please Him…no different than the reason a husband does something to please his wife. He doesn’t do it to be married (saved), he does it BECAUSE he is married. So the question becomes, “How do we add the faith side of the coin into the mix?” How do we live by faith? What does that look like? Is that the same as believing? What about trust? In this post, we’re gonna nail all this down once and for all and, hopefully, some of you will have the same breakthrough, “light bulb” moment that I did. 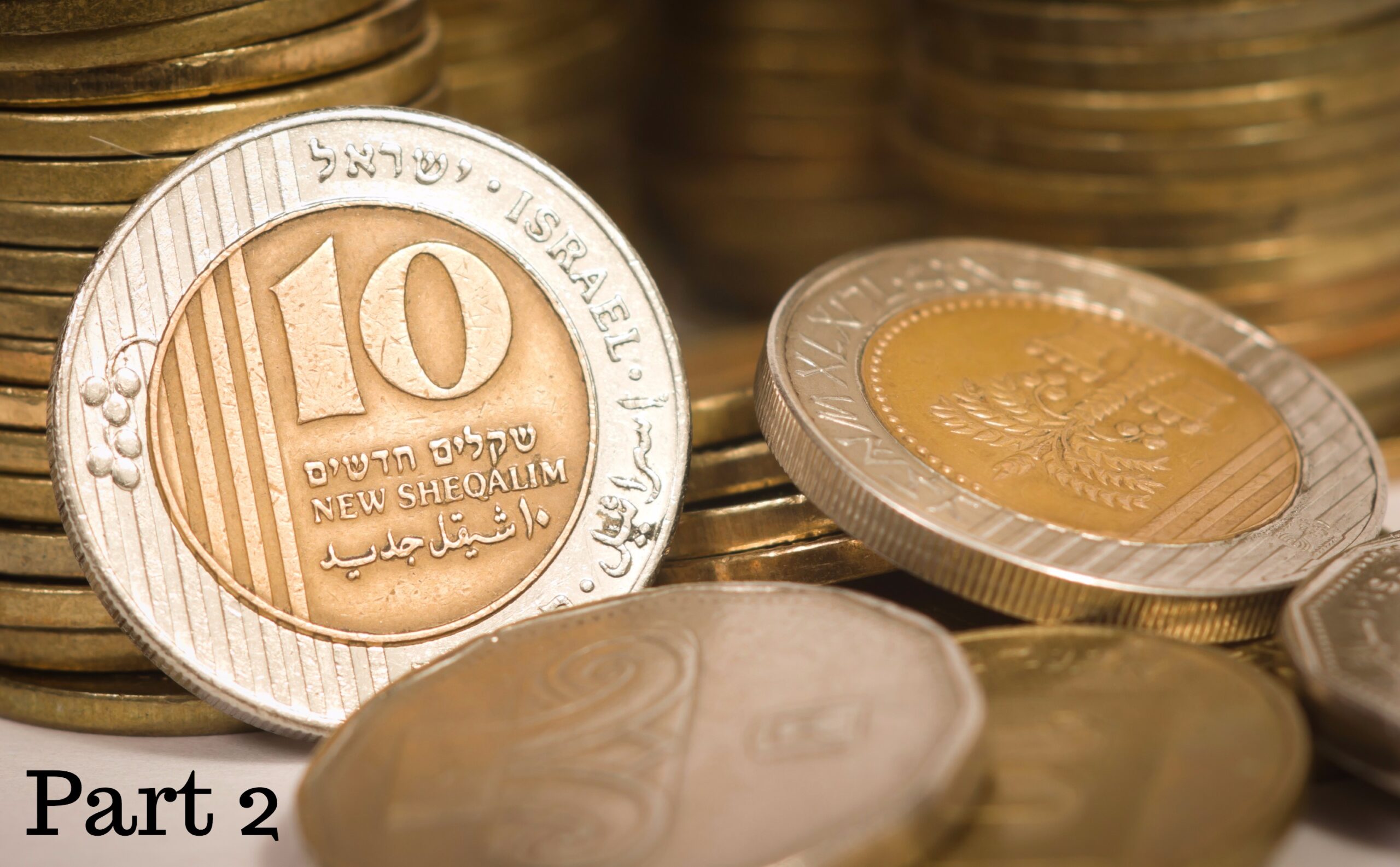 Okay. First things first. Unfortunately, in the English language, we use the same words for multiple concepts, which is why it can be hard to determine which concept we’re talking about. For instance, what exactly do I mean when I say, “I have faith”? Because I could also say “I believe” and mean the exact same thing. Going back to the original Hebrew always seems to bring so much more clarity to this very crucial topic. So let’s dive in.

Let’s start with the word “believe.” When we take the spirituality out of it and just take it at its face value, “believe” means to examine the facts or the evidence of something and come to a decisive conclusion. I have seen children pet this dog before many times. I have personally pet this dog. Therefore, I believe that this is a friendly dog. You have never lied to me before, so therefore I believe what you are saying. In English, believing is formulating an opinion based on observable information. In Hebrew, there really is no word for this definition of “believe.” In Hebrew, to “believe” IS to have “faith.”

In our English bibles, the word translated as “believe” in the Hebrew is “Aw-man,” Strong’s Concordance #539, which means to “build-up, support, to make true, to foster (like a foster parent), or to go to the right hand.” It is also connected to the origin of the English word “Amen,” which means “so be it, that is the truth, that is faithful, I agree, etc.” In Hebrew, believe is not an intellectual assent like it is in English. In English, we can intellectually say that we believe in something without any kind of action attached to it other than the existence of the brain wave it took to believe it. But, in Hebrew, to believe in something IS to do something about it. There is no such concept as “belief” without “works.” They are one in the same.

If I believe in a certain charity or organization, I build it up, I support it, I foster it by giving it what it needs to grow, and I put my right hand (the hand of authority and action) into it. To believe is to get involved. To not get involved either means the individual is either the child, the one that needs fostering, or they do not believe to begin with. There is no belief without an action attached to it. You can say all day long that you love your spouse, but if you do not attach actions to it to back it up, it is just philosophical love, about as desirable as gum that has been sitting out in the sun baking on the sidewalk. Yuck! (Unless you’re my 3-year-old. We’re still working with her on that…)

Now let’s talk about “faith” from a Hebraic perspective. The main word in Hebrew is “emunah” (em-oo-naw). Emunah is the idea of “faithfulness, firmness, truth, honesty or official obligation.” Ultimately, in Hebrew, faith means to stand strong and remain in one place. It is being true to the direction of a belief regardless of what the physical eyes actually perceive. Yeshua/Jesus was exercising “emunah” when he was sleeping in the storm on the boat in Galilee. He was standing strong in what He knew and nothing could dislodge that firm foundation.

Let’s use another example in our time. You are having emunah (faith) if a pit bull is on a 20-foot leash and you are standing 21 feet away when he lunges at you. If you do not move when he runs toward you, you are exercising faith. You are being true to your belief and proving your faith through the work of standing firm in the fact of the leash only being 20 feet long. Amazingly, the root word of “emunah” actually means to be secure, like a peg staked firmly into the ground as in Isaiah 22:23: “I will fasten him as a peg in a secure place, and he will become a glorious throne to his father’s house.” Faith is the “action” part of belief. It doesn’t flinch. If you flinch, you are doubting. It’s as simple as that. When we whine and cry and complain about our problems, we are doubting and showing the true measure of our faith.

Okay. Now let’s put some snorkel gear on and go a little deeper and add “trust” to the mix. Then we will pull all this together. So now that we have a better grasp of the difference between belief and faith, how does “trust” fit into all of this? In Hebrew, “trust” (betach) is none other than the word “secure.” It is intimately connected to the idea of a place of refuge or a strong tower. It carries with it the concept of city walls that cannot be penetrated. It is pure confidence in something or someone.

Let’s go back to our pit bull analogy. Belief is the intellectual assent that you know the leash is 20 feet long and that its stake is firmly rooted in the ground. You make a “statement of belief.” Faith is the action verb that causes you to prove the statement and do something about it (i.e. stand there when the dog lunges toward you). Faith is “putting your money where your mouth is.” TRUST is the fact that you were not the one that measured the leash, but your best friend did. You are secure in your friend’s word like you are standing under his strong tower. You believe it and then prove that belief through your “emunah,” your faith. Furthermore, you are so “secure” in your friend’s word that your heart doesn’t beat even a second faster and your eyes don’t even blink when the pit bull makes its final leap. To you, even though you see a ferocious beast that is attacking you, like Satan himself, you feel as secure as if you were behind a five-foot-thick fortress with no way in. You smile knowing that the dog can lunge all it wants; it will only get hurt when it hits that impenetrable wall (of faith). Are you starting to get it yet? In Hebrew, all of these concepts are connected and run together like the colors of a beautiful tapestry. To take one and isolate it is to ruin the entire masterpiece.

So let’s say it in another way. Belief is taking real, intellectual information and coming to a conclusion. Yahweh showed larger muscles when He unleashed ten plagues on the Egyptians than the gods and magicians of Egypt could. Therefore, like Moses, I believe in that God (pointing to Yahweh in the dark cloud out in the desert). I now am going to prove my belief by grabbing my suitcase and high-tailing it out of Dodge to follow this new God that has all the powers of the Avengers combined and then some. That is called walking out my faith through what I do. Then I come to Mt. Sinai where He gives me the Torah (instruction manual for life). I have no idea what on earth He is talking about or how to put it into practice at all. BUT, since His muscles are bigger than mine, and every other god I have ever seen, and because He has proven Himself to care so much about me that He freed me from Egypt (sin), I’m going to trust Him at His word. I will not worry about the giants in my life because the dirt under the fingernail of my God is larger than any giant that would dare turn his sword toward me. Emunah says, “It doesn’t matter what happens in my life because my God loves me, paid for me with the blood of His Son and He will take care of it. I believe in what He has done in the past. Therefore, I trust His word and will stand firm in my faith in Him.” On the flip side of the coin, no matter what happens in my life, I say, “Emunah.” “He’s got this.”

So far, we have explored the difference between belief, faith, and trust and have shown examples of what they look like in real life. As we continue, we are going to take these concrete ideas and take them into the spiritual realm and really examine what the “other side of the coin” actually looks like. Believe it or not, even though we have discussed the “spiritual/faith” side of the coin, we have actually not penetrated its reality or how to apply it. All we have done is examine how to use belief, faith, and trust to DO SOMETHING, which is the “works” side of the coin. In the future, we are going to take all of the exact same concepts and go BEYOND the things that are found in the earth realm and explore how we can actually exercise our spirit man to do “spirit works” in a spirit realm by the Spirit! Since we don’t fight against flesh and blood but against the principalities of this present darkness, we’d better find out how to fight using spiritual weapons or we will never get out of the desert of our own spiritual prisons! We are on a quest to be conformed into His image, to discover His essence and to light up the power of the inner man! So stay tuned!