As some of you watched Saturday’s live stream or were maybe there listening to the message, Pastor spoke on the Israel trip- but I still want to share more because there is just still so much to say! I want to start off by sharing the highlight of almost everyone’s experiences of the whole trip. Our journey to what is believed to be the Mountain of God, Mount Karkom, or Mount Sinai. The place where the Holy Spirit dwelled and gave the Ten Commandments. The place where the Israelites camped while Moshe was receiving the Commandments. This was an incredible day. 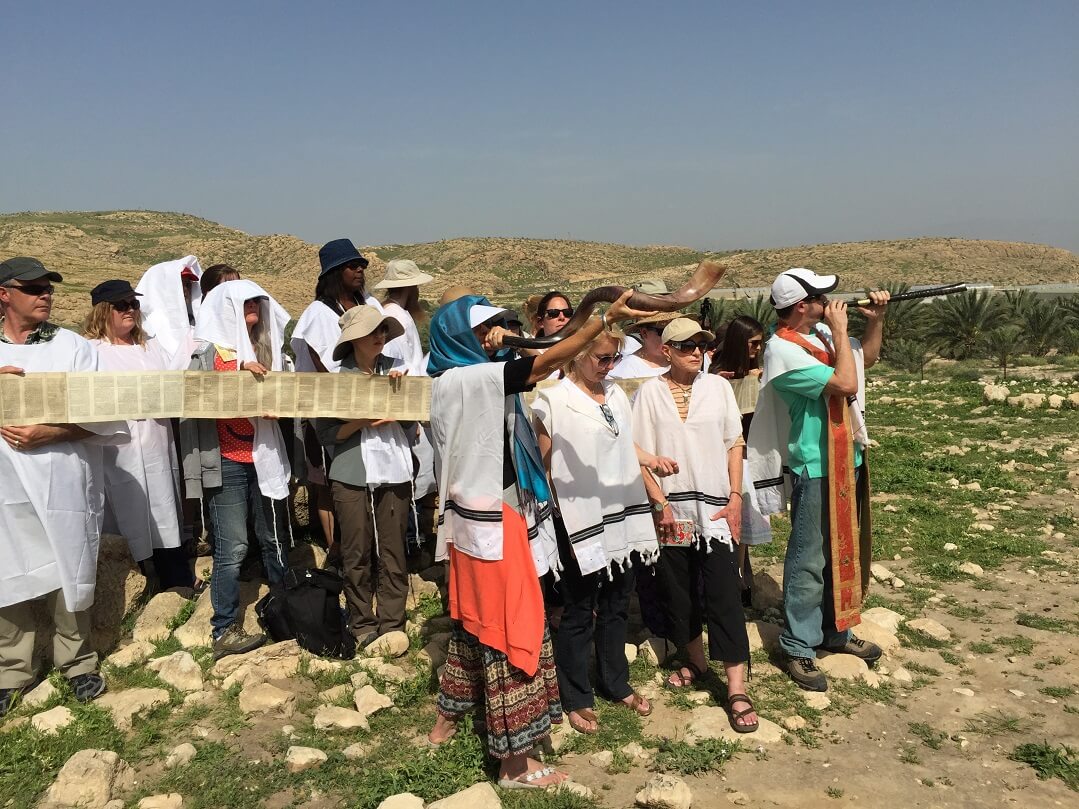 I didn’t think I had a favorite place or event that happened out of everything that we did, but if I did have to choose, this would probably be my favorite. Our wake-up call was 4:00 am and we had to be on the bus by 5:30 am. It was a three-hour bus ride from the hotel to the army base. We had to have the army escort us from their base to Mt. Sinai because we were on the border of Egypt and Israel. It was pretty neat actually! There was about a twenty-minute ride on pavement, and then another hour ride off-road in the middle of the desert just to get to the mountain. We were all riding in safari buses going over large rocks, through deep ditches, and ascending up rough, steep hills. It was crazy! There were several times when we almost flipped over. I felt like we were in a movie or something. It was amazing! We finally reached the base of the mountain and we all began to cheer because we made it all in one piece. lol

After we reached the base, we all had some teaching while Moshe pointed out several things such as the altar where the Israelites sacrificed the Golden Calf. He also pointed out that where we were all standing, and for miles and miles onward was where the Israelites camped. We worshipped for a little bit while our guides unrolled a 500-year Torah Scroll to where everyone was able to hold it and worship. It was so beautiful to be able to worship at the base of Mount Sinai. The Spirit was clearly present. Afterward, almost everyone (about 100-110 people) began ascending up the mountain. It was a 3-hour journey total on a hot day with no shade. But it was definitely worth it.

On the way up, Moshe pointed out many things that were evidence that the Israelites were there, that Moshe had been there. We saw many hieroglyphics which was amazing to see because some of them were close to 4,000 years old! We also saw the temporary place where Joseph’s bones were laid. (Ex. 13:19 Moses carried the bones of Joseph with him. Before Joseph died, he made the Israelites promise to do this for him. He said, “When God saves you, remember to carry my bones with you out of Egypt.”) I wish we found the actual Ten Commandments…but no such luck. Just kidding..;) In all seriousness though, I felt Yahweh’s Spirit very strongly on this Mountain. I just felt like I could breathe in such fresh air. But not necessarily in the physical realm. I felt such fresh air Spiritually. It’s difficult to explain. But I felt His authority, I felt His power that had once dwelled there. I could almost feel and see Him watching us..which I know He is always watching over us. It was just a different feeling that I can’t necessarily explain.

When everything was said and done, we started to head back at sunset. The sunset in the desert is absolutely gorgeous. I couldn’t even capture it and all its beauty. I just wanted to capture the picture to put in some file inside of my mind and never forget it. I wanted to capture ALL of the beauty and naturalness of that day, that Holy Mountain of God. The stars began peeking out from the clouds as the moon shone brighter and brighter. They were so bright, so unfathomably beautiful. The sky became so clear, the stars just shone so brightly. I wanted to just stay there forever. It was so peaceful, so far away from anyone or anything. I just pray that someday we can all go back and experience it all again. It was so beautiful. I am so thankful to Yahweh for allowing us to be at His Holy Mountain and stand in awe at how marvelous His Works are.