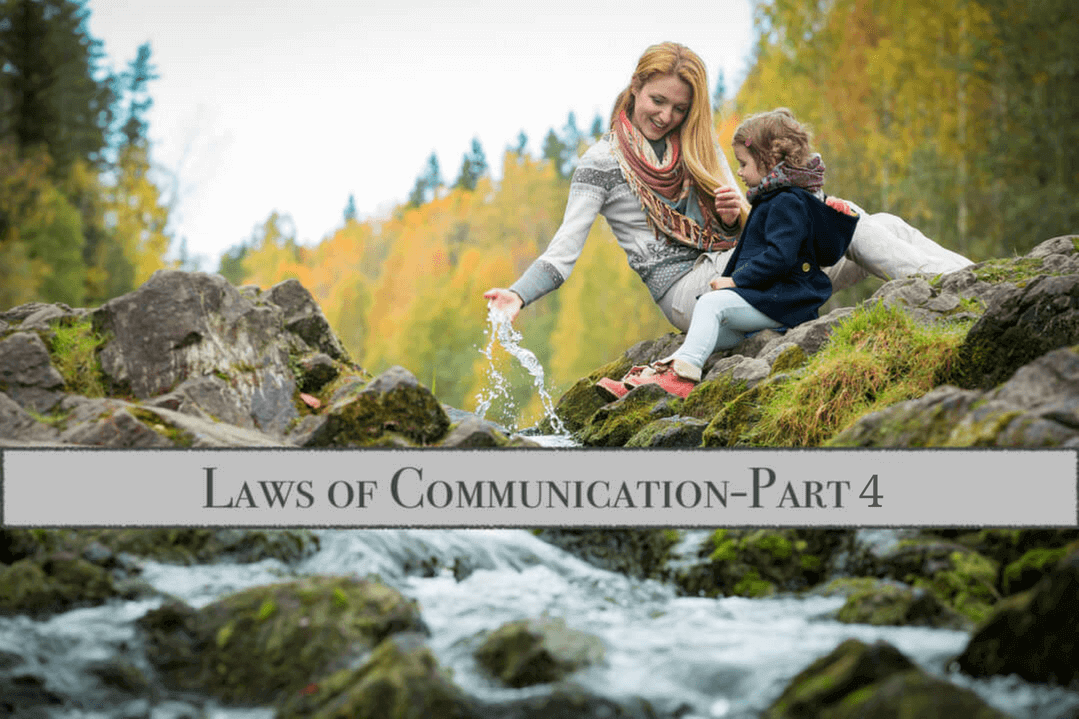 Although this might seem completely intuitive, many times teachers, especially parents, don’t really comprehend the gravity of this point. Parents sometimes take too stringent an approach to their job, barking out orders and expecting them to be obeyed. However, this isn’t the most effective approach if we want to raise our kids in the way they should go. We need to take the time to build a relationship with our kids and those we’re trying to communicate a message to and make sure they feel our love and affection. When they truly know that we’re looking out for their best interest, it’s much easier for them to receive our instruction.

It’s also important that we respect everyone we’re trying to communicate with, including our kids. Just because they’re children doesn’t mean we have the right to disrespect them. All too often Cheryl and I see parents bullying kids in an effort to discipline them instead of instructing them. When we disrespect those we’re trying to teach they’ll never hear a word we say. When we respect even our children, we’re teaching them how to respect others, as well. I also see many people try to share a new truth they’ve learned from the scriptures with a friend and unknowingly disrespect them by making them feel that their current belief is wrong. This immediately makes the person feel inferior and defensive. The common ground of all relationships and communication is respect.

All communication involves thought, feeling, and action. Oftentimes we see communicators bring forth a great thought with a lot of feelings. But if it has no action associated with it it’s not applicable in listeners’ lives, and is, therefore, useless information. If the message is filled with emotion and there’s a great call to action but no one knows exactly what the thought is supporting the action, all the best intentions will fall gravely short. Great communicators, whether they’re teachers, speakers, ministers, or parents, always make sure that they have a very clear thought that they communicate from the heart as well as an action to go with it. The communicator carries with him something he knows, something he’s feeling, and something he’s doing himself. This last point cannot be overemphasized.

Oftentimes those who are communicating a certain message aren’t “doing” it themselves. They’re great at communicating their thoughts – “Johnny, you need to memorize one scripture per week” – but aren’t so good at following through with their own instruction. The pastor may give a great message on how members need to have their house in order when their own kids are the worst-behaved in the church. A mom can tell her kids not to curse yet spit poison from her lips every time she gets angry. Teachers who don’t back up their messages with their own lives are wasting their time. Learners are programmed to look for results so they know the message is real and not just words. Learners see everything in reverse order. The results of your own life produce the feeling in them that leads them to fully comprehend the thought you’re communicating which ultimately leads to every teacher’s final goal: change.

It’s not a verbal message we’re trying to communicate but a life message. If the life matches the message, the message is received, believed, and implemented. People who want to learn, whether conscious of it or not, are looking for real messages from real people. Not perfect, but REAL. Care about the ones you’re trying to teach. Get to know them. Find out how they learn. And live the message you want them to hear. THIS is what brings the change.