Incredible Second Day of Sukkot! Part 2 – Chiseled in the Spirit

Incredible Second Day of Sukkot! Part 2 – Chiseled in the Spirit

Not only was OB super blessed by the revelation that the Spirit gave him, but I was also blessed as well. My blessing started back in Israel with a close friend of mine who works with archaeologists and is an expert on the history of the House of David. After we finished filming for the documentary about the discovery (that will hopefully someday come out) he presented me with a gift. He told me it was one of the most prized gifts that I could receive. After building it up and telling me how special it was, he then presented me with it. I was less than impressed as he handed me what appeared to be a heavy rusted metal door stopper. I thought for sure it would be something far more significant like the spear of Goliath or the sling of David. That would have been very cool. An ancient door stopper? Really? I would quickly find out that it was not a door stopper. 🙂 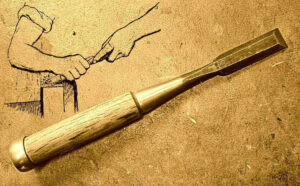 He went on to explain to me that this was an ancient chisel that they held in one hand and hit it with a hammer with the other hand. That made more sense, but I was still not impressed. Then he told me that this was not just any chisel, but one of only two that were found at the temple mount that date back to the time of David. In other words, this chisel had been used to build the Temple of Solomon. Ok, that was pretty amazing. The other one is in a museum in Israel, and he showed me a picture of it in a book. That was pretty cool to see a picture of my chisel in a museum book.

This chisel has bothered me for years as I felt like it had a greater meaning for me, but I didn’t understand why. Out of all the things that he has run across over the years and all the things he could have presented me with, he chose an ancient chisel. I could think of ten things I would have rather liked to have had that are just sitting around his house that are mind-blowing. A chisel? My answer would come today.

Right after the ax head revelation that OB received, I told him my chisel story since it seemed relevant and reminded me of the gift that I was given from my Israeli friend. Then, as we sat in the sukkah and were talking about something else, the Holy Spirit spoke through me without me knowing it and I said, “This is why God sent me here to this prison…to chisel me.” I immediately stopped as if I was just shocked by a sudden jolt of electricity. Everything became clear, and just like OB and his ax head revelation, everything became as clear as a bright sunny day of why the Lord had my friend give me this particular chisel. He was prophetically telling me that I needed to be chiseled–that I was the temple of the Holy Spirit and I needed to be chiseled a bit more in order for His glory to fully be realized in my life. Just like the chisel that was used to build the Temple of Solomon, so Yahweh was using my trials, tribulations, and pain to chisel me into the temple that He wanted me to be. Although this may not sound like a grand revelation, it was for me. The Creator chose to take time out of His universe to connect the dots from way back then until now. The pain in my life was coming from the chisel in His hand. I was His temple. God was working on me. What an honor to be hammered on by the very hands of my Maker.

How often do we miss the connections of our life because we fail to ask the Spirit to make those connections? He is always speaking to us and He uses every little thing you can think of to do it. In my case, He was letting me know that I can’t go any further until I get chiseled. The crazy thing is that all of you know that I have said for years that whatever happens in the physical is happening in the spiritual and vice versa. At the same time that I am growing exponentially and being “chiseled” in the Spirit, I am also working out a lot, getting “chiseled” in the flesh. The two are mirroring each other. I have never been in better shape physically or spiritually. The spiritual is matching the physical. Funny how that works.

What is your story? What hints have the Spirit left for you over the years that you have never understood? Take a moment during this Feast and ask Him to connect the dots for you. Ask Him to speak to you and open your eyes to all He is doing around you. If I wouldn’t have spent 3 hours in the sukkah today with my friend, neither one of us would have received such blessings and revelations from our King. Take the time. Seek His face. Cut down the twisted trees in your life. And get chiseled in the Spirit!