At this point in our journey we’ve learned that many times, pain is induced by our own minds and really doesn’t come from others at all. It’s all about how we perceive our situations and the things that happen to us rather than the situations themselves being the root of all pain. We then learned that we can stop the mind from creating this pain by “taking every thought captive” and putting it on the mind of Christ. This entails an understanding that the spirit man, the real us, is not the carnal mind. And in the last article, we learned that most of our pain comes from allowing our minds to judge both the past and the future, rather than living in the Christ Now moments. In this article, I will expand on these concepts by introducing another principle to assist you in the moment of pain. 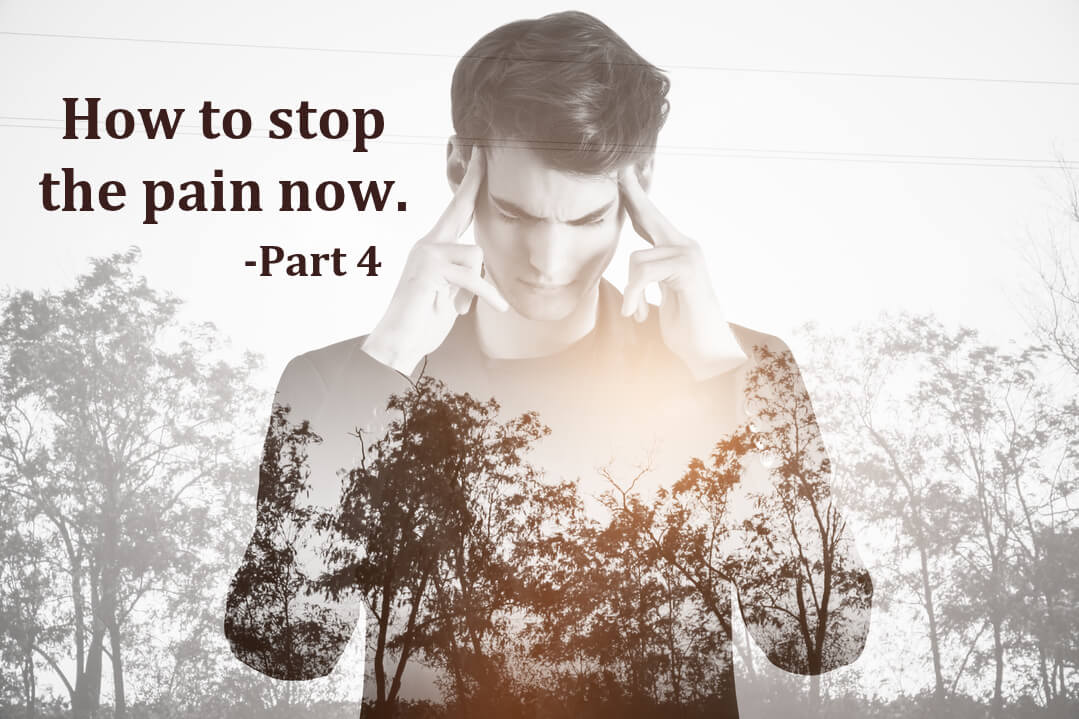 This principle is powerful and, with the divine assistance of the Holy Spirit, will help transform you more into the image of Christ.

There are two different kinds of resistance: intellectual and emotional, and it is critical to understand the difference if we are going to take every thought captive and display the fruit of the Spirit spoken of in Galatians 5, fruit that includes self-control. Self-control is built around controlling – obviously – the “self.” In order to control something, we must first understand it well enough or it will out-maneuver us at every turn, mastering the real us rather than us mastering it. So let’s take a minute and define both types of resistance.

Intellectual resistance is when a teacher is grading papers and comes across a student’s answer to 1+1 equaling 3. Her mind immediately disagrees, knowing that the answer is incorrect. There’s no emotion involved; it’s just a static response. She marks it wrong and moves on. Intellectual resistance is the mind’s way of determining what facts it agrees with and what facts it disagrees with according to the information that has been given prior to making those determinations.

When we take things personally, what’s happening is our emotional system becomes compromised and then influences our mind to protect our ego. That’s what’s really happening. Our ego feels like it’s being attacked so it triggers the fight or flight mechanism inside us, forcing a response. If we break it down further, we discover that the layer underneath the ego is insecurity. Here’s an example. I recently wrote an article that I spent over a day on, working diligently on it to get it exactly where I wanted it. When I shared it with my wife she didn’t believe that now was the time to release it. I immediately became frustrated because I’d spent so much time on it and was proud of the work I had done. Ultimately, my ego was at stake and my emotions were starting to take it personally which is what triggered the response. I was “resisting” her thoughts and judging them as negative because they weren’t my thoughts. If I would have had no emotional system, the intellectual part of me would have taken in the new information she was suggesting and would have agreed with her completely, as her thoughts were quite logical and made perfect sense. But because of my ego, the intellectual part of me was turned off temporarily and my emotions rose up to protect my pride. As I recognized what was happening I chose to just observe and listen. By refusing the urge to resist what she was saying, my emotions came under control and my intellect could judge what was being said properly.

THE LIFE OF CHRIST

As a case in point, take a look at the life of Christ. When they reviled Him, He said not a word. When they beat Him, He commented none. When they spit in His face, called Him names, slandered His character, tore His clothes, and pierced His body with nails He spoke not a word. Can you imagine if when the religious leaders told Him that He was not the Messiah if His response would have been, “I am too the Messiah! Quit slandering me! I can prove it!” But a lion doesn’t have to announce to the other animals that he is, in fact, the king of the jungle. There was simply nothing that anyone could say that could challenge His ego. He knew who He was and how His Father felt about Him. He knew His Father was His only Elohim.

Understanding the name “Elohim” is critical to stopping the resistance. Elohim is not just another term for “God.” In Hebrew, it carries the idea of a “mighty judge.” So when Yahweh tells His people in the first commandment, “I am Yahweh (LORD) your Elohim (God), who brought you out of the land of Egypt, out of the house of bondage, you shall have no other elohim (gods) besides Me,” He is stating far more than you might think. He is literally declaring to them, “Where the Egyptians used to be your judges, <<>> am now your Judge. I judged them and took you out to make you Mine. Now understand that you are not to allow anyone else to be your judge besides Me.” To allow someone else to pierce your emotional system is to forget who you are in Christ and how HE feels about YOU. It is to temporarily lose your identity as a child of the King.

This principle of not resisting takes some practice and a conscious understanding of how the ego works as well as a concerted effort to comprehend and stay within the identity of our King. It means that we have to take ourselves off of our own thrones and stop being so concerned with ourself. In the age of iPhone, iPad, iCloud, iThis, and iThat, everything seems to revolve around the “I”/”me” mentality. This is putting ourselves above others.

But what if someone does something or says something that offends me? What do I do? Well, let’s talk about that for a minute.

When you are in the moment of the offense, don’t resist it. Let it go right through you as if you were just a bystander watching it all happen. The Bible says to be quick to hear and slow to speak. In other words, when your emotional system is compromised, all speaking is resistance and resistance creates pain. This is where the fruit of the Spirit – self-control – actually matters. The “self,” the “I,” the “me,” is what we’re trying to get rid of. To defend your “self” is to defend the carnal egotistic man, which is giving it control. Self is not supposed to be in control. We are to have ourselves under OUR control, under the control of the inner man that is led by the Spirit of God. So when we argue our point, defend our ego, or correct the person that is offending us out of emotion, we’re displaying the fruit of the enemy and allowing our flesh to control who we really are.

A COUPLE OF FINAL POINTS

The Creator is constantly using anything He can to get us to reflect more of the image of His Son. He used Joseph’s brothers to reject him and throw him into a well, which led to a false accusation by Potiphar’s wife, which led to prison, which led to Joseph being elevated to the viceroy of all Egypt. When Joseph was first thrown into the well and first put into prison, he must have been very angry both with his brothers and with Potiphar’s wife. He was just as emotionally compromised in those moments as any of us would be. He tried his best to get out of that well and to get out of prison. But in the end, what did he learn? What did he say to his brothers? “So now it was not you who sent me here, but God” (Genesis 45:8). Yahweh was trying to get Joseph to the point where he would stop resisting and give in to the afflictions around him, afflictions sent by God for his greater good (Romans 8:28).

So how do you know that your current affliction is not sent by God to buffet your soul, to kill your ego, to give you practice loving with no return, and to make you more into the image of Christ? After all, how will you learn to truly make Him the only Judge (God) of your life if you’re not presented with opportunities that allow you to choose between the words and actions of fallen people defining you or what your heavenly Father says about you? What if every single negative situation is allowed into our lives, sent by the Creator Himself, just to test and to train us to be more like Him? If the Scriptures are really true when it says that “every step of the righteous is ordained,” and “all things work together for our good,” then there really is nothing “negative” that happens to us. This means that all pain really is a perception of our mind, which is just a manifestation of our ego. And although there are some exceptions, they are few and far between. It’s our choice whether to resist or not. I can resist and judge the situation with my mind as either right or wrong, but the second I allow my emotions to defend my ego I have taken the bait of Satan.

So don’t resist. Let it flow through you. The next time you feel your heart racing and the need to fire something back at the person you perceive to be attacking you, pretend like you’re someone else who was just put into this body and you have no idea how you got there or what’s going on. Because if that did happen in the middle of an emotionally-charged situation, you would be trying to observe and gather information to determine what was going on. Bystanders observe and do not get involved because their ego is not engaged. You’ll be shocked at what you learn when you allow the other person or situation to happen and you just observe with no reaction. Then, once it’s over, it becomes part of the past. From there you don’t judge it, but simply analyze it and determine what appropriate positive action will please your King. Yes, it sounds robotic rather than human. But in reality, it’s more like a king instead of a peasant. It’s living Christ NOW! It’s living IN shalom and staying IN love. Wanna be in love again? Re-read this article again from that perspective. 😉