Within the spring season of Passover lies the first significant week-long festival of the year. It’s called Unleavened Bread and it’s a seven-day feast with a high Sabbath on the first day and on the seventh. During this time, no one that calls the name of Yahweh their God is supposed to eat any leavened bread. All bread is to be unleavened. But why? Virtually all the sacrifices in the temple that require bread specifically say that it has to be unleavened bread. What’s the deal with leaven, anyway, that makes its use seem practically banned? This article will answer that question. 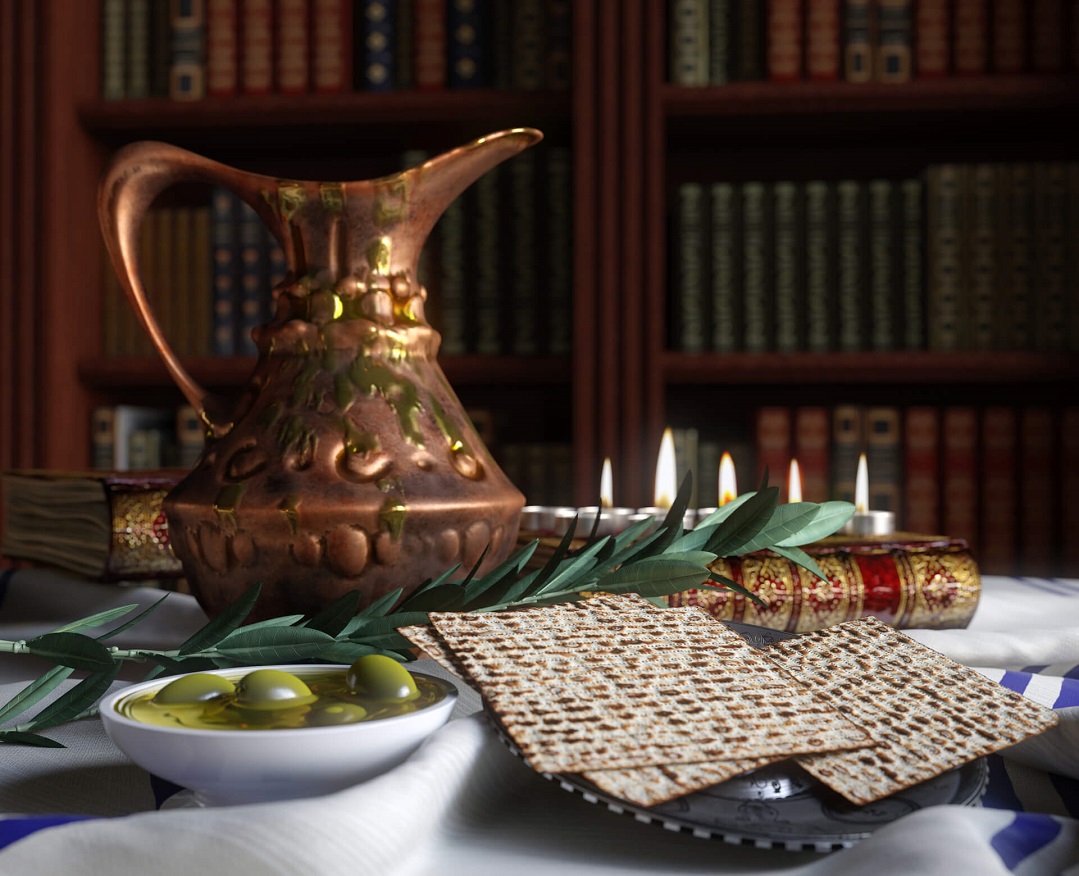 If you look closely at the scriptures in the Torah that describe how unleavened bread is used, there is one thing that seems to be consistent: it’s almost always mixed and anointed with olive oil. This is both interesting and significant. It’s interesting from a scientific perspective and significant from a prophetic one.

By itself, bread isn’t very easy to burn with fire. But it burns bright if mixed with oil. Prophetically, I see several incredible connections. First, the olive oil comes from the pressing of olives from olive trees. The olive is simply the fruit of the tree and the tree itself has always been a symbol of Israel (Jer. 11:16, Rom. 11:17, 24). When Israel is a green olive tree and producing the fruit it was meant to produce, it brings forth the oil that lights the temple, the oil that anoints the priests, and the oil that is mixed with the unleavened bread which causes it to burn brightly before the Lord.

The connection to us as believers is striking. When we produce the fruit of the Spirit of love, joy, peace, patience, kindness, goodness, faithfulness, and self-control; love Him by keeping His commandments (1 John 5:3); and love our neighbor as ourselves, we’re like an olive tree that’s ripe in its season. We produce one thing: the oil of gladness that brings forth the anointed fire of God. We say that we want to be “on fire for God.” There’s only one way to do that: produce the oil that covers us like the unleavened bread offering, which allows the Spirit to ignite us to burn brightly as a sweet-smelling offering before Him. Unfortunately, the only way to get the oil from the olive is for it to be pressed. This is the very purpose of trials and tribulations. They cause the roots of our tree to go deeper and cause the “oil” in us to be pressed out so that it may be used properly for His glory. Without the pressure of the press, the olive never reaches its full and intended purpose.

The entire purpose of anointing the bread is to set it apart. In Hebrew, that word is kadosh: holy. When Yeshua lifted up the bread and said, “This is my body,” he was stating that this bread is “set apart;” it’s different from all other bread from all other nights. He was connecting himself with the unleavened bread of Passover. Why is this important? Because of what Deuteronomy 16:3 says about why Yahweh wanted it to be unleavened bread to begin with:

The Israelites didn’t have time to let their bread rise in advance of the exodus; they had to leave Egypt in a hurry. The pain and suffering they had endured for so many years had culminated in the death of thousands of firstborns in a single night. This bread was representative of the “bread of affliction.” In an incredible way, Yeshua was telling his disciples, and, by default, us today, that His time had also come to leave His Egypt (Earth). Just like the Passover lamb gave its life so that others could live, so Yeshua gave His life so that we could live. While the firstborn of Pharaoh died because of his father’s disobedience, the Firstborn of all creation gave His life willingly through obedience. The Bread of affliction was anointed and became a sweet-smelling, acceptable sacrifice before Yahweh’s throne.

Through this example, we see that it’s through affliction that we become anointed. We learn obedience from pain and suffering which leads to deeper intimacy with the Creator. But we must stay unleavened. When we add the yeast of our own will and desire to fix our own situations, our own traditions, and doctrines that contradict the Scriptures, the offering becomes unacceptable.

In Hebrew, the word for unleavened bread is matzah (spelled mem, tsade, hey). Most people are familiar with the modern-day matzah: the large square cracker used during Passover. But the original matzah was more like flatbread or pita bread. It was sweet because it had not been infiltrated by the sour taste of the yeast. Yeast is a living bacteria that attacks the sugars in the dough and produces a gas that causes the bread to rise. Although there are times in scripture where leaven is exemplified in a positive way, it’s used in the negative sense the majority of the time, adding something to the dough that causes it to be puffed up.

Matthew 16:6 Then Jesus said to them, “Take heed and beware of the leaven of the Pharisees and the Sadducees.”

Although the disciples were confused by what their rabbi meant by this statement at first, they quickly realized that He was referring to the doctrine of the hypocritical religious leaders. Their pride had caused them to be puffed up, creating “leavened bread,” unacceptable in the eyes of their Creator. When we allow our will to receive to be engaged, that yeast of pride permeates to the center of our very souls, consumes the sweetness of His Word in us, and turns us into puffed-up, sour “bread” in His presence. The will to receive only knows how to receive the yeast of this world. When we live in a state of giving and force our will to refuse to receive for ourselves, the bacteria of life that destroys the sweetness that Christ brings is blocked and we become anointed and acceptable before Him. Paul really highlights this concept in 1 Corinthians chapter 5:

1 Corinthians 5:6-8 Your glorying is not good. Do you not know that a little leaven leavens the whole lump? 7 Therefore purge out the old leaven, that you may be a new lump, since you truly are unleavened. For indeed Christ, our Passover, was sacrificed for us. 8 Therefore let us keep the feast [of Passover], not with old leaven, nor with the leaven of malice and wickedness, but with the unleavened bread of sincerity and truth. (bracketed insertion mine)

Paul is trying to teach his followers that they are to celebrate Passover in a new way, not with pride, malice, or wickedness. That kind of offer will not be accepted by the Creator. This tells us that one definition of unleavened bread is “sincerity and truth.” This definition is critical to understanding what a proper unleavened bread offering is all about. It’s not enough for someone to be sincere. Most all religious people are sincere. If that was the only barometer of acceptance, virtually all religions would be accepted, for all religions are sincere in their efforts. So it cannot just be the “heart,” or sincerity, that tips the scales. Paul says that true unleavened, untainted bread is characterized by the truth, the whole truth, and nothing but the truth. What is truth? Whatever comes out of the mind and mouth of the Creator. And from our perspective, He has revealed His truth through His holy Word.

In the end, it all comes down to whether we’re seeking to bless others and our Father by forcing our will to do His will, or whether we’re seeking to please and receive unto ourselves at others’ expense. As a matter of fact, it’s very interesting to learn that in Hebrew, there is another word pronounced matza but spelled mem, tsade, aleph instead of mem, tsade, hey. This word literally means “to find someone and obtain as one’s own.” It’s a beautiful wordplay since in order to be truly unleavened (matzah), we must only seek after the One who called Himself the Bread of Life, the true Unleavened Bread of sincerity and truth. We must seek Him with all our hearts and make Him our own.

To fully adhere to Yeshua is to seek Him and His will to such a degree that we have no will to receive at all. We’re not concerned with what others think about us or about pleasing others because we’re afraid of what they might think of us, or taking the easy way out when we’re in a tough situation. One who desires to obtain Yeshua as his own fully comprehends that it can only come through the bread of affliction. This person embraces the pain and praises his Creator in the low position he’s in because he recognizes that the anointing oil only gets poured over the one who chooses to be crucified with Christ, the one who accepts the affliction in praise, knowing that the fire that’s coming will completely consume his will and leave the Creator smiling at his “matzah” of sincerity and truth.

Many of you have removed all things having to do with leaven from your houses. You’re remembering the fact that not only did your ancestors escape in haste from Egypt, but you also escaped from death the day you ate from the Bread of Life, Yeshua our Messiah. You’ve chosen to remove all leaven in your house to remind you that we are to remove all sin and pride in our earthy tabernacle: our bodies. Take the time this week to make yourself a real offering that is acceptable to Him by choosing to put others above yourself and loving without asking anything in return. Choose to give rather than receive and refuse the yeast of life that so desires to ruin the work the Father is doing in you. Seek Him and His presence. Obtain Him and make Him your own. Glory in your affliction. Welcome the fire. He’s simply making YOU HIS own.