How Do You Wait on The Lord? We had a packed house for Day 5 of our Hanukkah celebration. And what a blessed evening it was! A man from my hometown got radically saved and the Father is delivering him from his drug addictions as we speak. He gave his testimony in front of everyone in the room and said that it was “time to make a change and get right with God.” The light was very bright in the room; you could feel the Spirit in an almost tangible way. 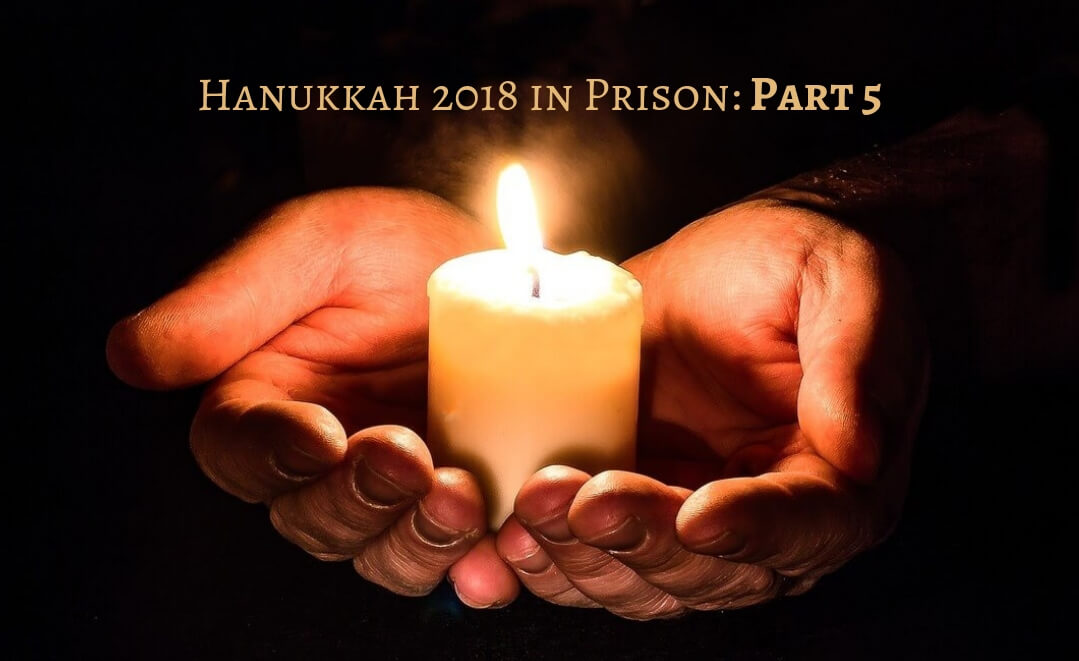 As they passed the wooden Hanukkiah around and the first five people lit one candle, I began a short review of the previous four days and then began to talk about King David. I noted how the Light was passed to him and how he blew it for most of his life. I encouraged everyone not to look down on themselves for being in prison because David was no better a man. He committed adultery and then tried to cover it up with murder. He was a true criminal and God had to chastise him heavily because of it. He had to go through a tremendous amount of pain over the next several decades. His firstborn from Bathsheba died and his son Absalom took over his throne, an act that forced him into hiding. So David understood pain. He was imprisoned, malnourished, and despised…much like a prisoner today. I tried to encourage the men that if David could still be called a “man after God’s own heart” after all of his mistakes, how much more could we, as well? After all, if our God is not a God of restoration, love, forgiveness, and grace, He’s no god at all. But He IS a God of forgiveness and He chastises those He loves. We all have hope; we just need to wait for His deliverance! Speaking of waiting, I read a few scriptures on waiting on the LORD and connected them to being the light. I explained that “being” a light is an action, something we actively do while we’re waiting on the hand of the LORD in whatever situation we find ourselves. Psalms 37:6-7 He shall bring forth your righteousness as the light, and your justice as the noonday [when you] rest in the LORD, and wait patiently for Him. (Parenthetical insertion mine)

In English, the word “wait” has the connotation of being on pause, stopping for a moment, ceasing all activity, being patient. But that is not at all what the meaning is in Hebrew. In Hebrew, the word “wait” is qavah. It literally means to bind together. Strong’s says it is the intentional straining of the mind in a certain direction with an expectant attitude. Did you catch that? Waiting is not just finding something to do or ceasing from activity until something you’re waiting for happens. It is looking intently in the direction of the One on whom you are waiting and expecting great things! But that isn’t all; it’s much deeper. I mentioned that the first definition of qavah is “to bind together.” There’s a reason for that. The reason is because qavah is connected to the word tiqvah, which is the word for a cord or rope. Tiqvah is the word in the Hebrew Bible that is most often translated as “hope.” You got it. Hope. When you are waiting on the LORD, you are putting your hope in Him. In the Hebraic mindset, you are binding yourself to Him like a rope. You’re over a cliff and you’re looking up at the rope you’re holding onto, fully trusting and completely expectant that He will pull you up to safety. This is what it means to “wait.” It means to hold onto that rope with all your strength and believe with all your heart that He will do His part. This is exactly why the Psalmist says that if we will wait patiently on Him and rest in Him, “He shall bring forth your righteousness as the light, and your justice as the noonday.” When we commit our ways to Him He delivers us out of every trap the enemy sets for us and becomes the proverbial “light” at the end of the tunnel. We ended our night by showing through the Prophets that this “light,” this “rope,” is none other than the Word of God, the Angel of the LORD, who manifested Himself in the form of Yeshua HaMachiach/Jesus the Christ. All those who hold onto the tassels that flow from the corner of His robe will receive power from on high. Yeshua is the rope of life, so hold on tight and let Him do the rest! Happy Hanukkah! Jim Staley