(This article is part of a 3part series called “Christmas, Hanukkah and the Anti-Christ”)

In Part 1 of this series, we went through the story of Hanukkah and unpacked the incredible heroism that arose from the pits of the Greco-pagan influence that almost wiped out the people of God two hundred years before Christ was born. We showed how this story truly connects to us as believers and why millions of Christians around the world are waking up to why their Lord celebrated this holiday in the first century. We revealed how Matityahu was a shadow of the coming Messiah who liberated the temple of the Holy Spirit and how the light of the Menorah, the symbol of Messiah, is once again finding itself the central focus of Christian homes everywhere. 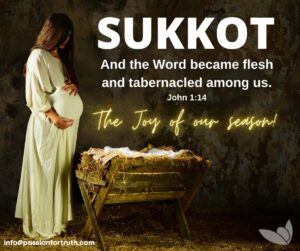 In this part, we will talk about the connection Jesus has to Hanukkah, taking our time to discover when he was conceived, born, and not born. Christians have been celebrating the birth of Christ on December 25th for over 1700 years. With all the controversy surrounding and speculation about this topic, I believe it is important for us to finally learn exactly when He was born. After all, if we’re seeking the truth, and we don’t want to fall into the same trap that the Jews did during the time of Matityahu when they allowed themselves to be influenced by pagan traditions, then now would be a good time to start doing our homework.

Let’s start by going to the book of John to discover that Yeshua traveled all the way to Jerusalem in the dead of winter and was found in the Temple during the Feast of Hanukkah:

John 10:22–23 “Now it was the Feast of Dedication in Jerusalem, and it was winter. 23 And Jesus walked in the temple, in Solomon’s porch.”

This is significant because the vast majority of Yeshua’s ministry took place in the Galilee region, and He only came up to Jerusalem during the periods where all of Israel was required to come to celebrate the Feasts of the Lord. What’s interesting is that Hanukkah is not a commanded feast of the Lord, but instead was a holiday, much like Independence Day is here in America. So for Yeshua to travel a hundred miles in the middle of winter when it was cold, rainy, and travel was not easy illustrates that there is a high probability that He placed much value on this feast. After all, He is the Light of the world and was the source of everything the temple stood for. Celebrating the ousting of pagan forces from His people is something God has been doing since time began. This beautiful time in Jerusalem was a perfect time for the Light of the world to do just that: share His Light.

But the connection goes much deeper than just Him attending the feast. It is my belief, along with many other scholars, that Yeshua was actually conceived during the Festival of Lights, which would make this holiday a very special time for Him, His family, His disciples, and for us today. How do we know? Let’s take a quick look at the timeline as it will be more than relevant to our final thesis on this subject. For if we can learn when He was conceived, we can then know when He was actually born!

We know from Luke chapter 1 that when Gabriel visited Mary and told her that she was pregnant with a child from the Holy Spirit that her cousin Elizabeth was six months pregnant with John the Baptist (Luke 1:26–36). This gives us a benchmark. All we have to do is find out when Elizabeth conceived and that would tell us when Mary conceived. And praise God, we can do just that. Luke 1:5 tells us that Elizabeth’s husband was Zacharias, a priest who served in the temple in the order of Abijah. In the story that follows, Luke tells us that when Zacharias was serving in the Temple, he was approached by the same angel Gabriel and was told that his wife Elizabeth was going to conceive in her old age. However, Zacharias didn’t believe the angel, and because of his disbelief, he was made mute until the prophecy was fulfilled. We pick up the story in verse 23: “So it was, as soon as the days of his service were completed, …he departed for his own house. 24 Now after those days [of service at the Temple] his wife Elizabeth conceived…” (bracketed insertion mine). So we know that Zacharias went home after his time of service and Elizabeth became pregnant. Now, all we have to do is find out when he got home. For that piece of the puzzle, we need to go back to the Hebrew scriptures and find out when the division of Abijah was called to serve. This information is found in chapter 24 of the first book of Chronicles.

The chapter starts off by telling us who the sons of Aaron are and how they were divided into 24 priestly courses for the service of the Temple. Verse 10 tells us which course Abijah was serving in.

So the family of Abijah, of which Zacharias was a part, was in the eighth course of service. Each course was one week long except for the major Feasts, during which all the priests served. The eighth course ended at the beginning of the month of Sivan right when the Feast of Shavuot was about to begin. The text says as soon as his course was over, he came home and his wife conceived. Knowing that he would have stayed for the festival of Shavuot with the rest of the priests means that he came home on or around the 5th or 6th of Sivan. Given the fact that the human gestational period is 40 weeks, that means that John was born on the first day of Passover, the very day Yeshua died! Wow! When John said that he was the forerunner of the Messiah, he wasn’t kidding! His own birth was prophesying the day of the Messiah’s death!

Now that we know when John was born, all we have to do is back up to when Elizabeth was six months pregnant, which can be found in Luke 2 when Gabriel tells Mary that she has conceived by the power of the Holy Spirit. Using the Hebrew calendar and counting 24 weeks (6 months) from the time Elizabeth conceived, we land on the 7th day of the Feast of Hanukkah! Could it be a coincidence that we land on the 7th day, the perfect number and the number on which the entire calendar of God is based? I don’t think so. God is a God of perfection and exactness. And if He has John being born on the same day that the Messiah gives His life for all mankind, I can certainly ascribe to the idea that Yeshua would be conceived on such a precise timeline. But even if there is a margin of error of a few days, it still puts John’s birth during Passover and Yeshua’s conception during the Festival of Lights. What a glorious Light He was!

Lastly, once we know when Yeshua was conceived we can easily know when He was born, as 40 weeks from Hanukkah puts His birthright at the beginning of the Feast of Sukkot (Tabernacles), the end times harvest festival where all of Israel is dwelling in booths (tents called sukkahs) to commemorate that their ancestors lived in tents in the wilderness and that this life is not our permanent home. It is the most celebrated feast day on the entire calendar, and it’s when our Messiah was born! He was conceived during the Festival of Lights and born during the Feast of Tabernacles when He tabernacled among men. God is certainly a God of perfection in using His calendar as the prophetic foreshadowing it is. So why do most Christians celebrate His birth on December 25th? For that, you’ll just have to wait for Part 3!