As we move into Leviticus 16 and following, we start to transition to a different flow as far as what Yahweh is conveying to His people. He has given great detail on how to build His house, how to operate and minister before Him, and has given specific instructions on how His people are to present themselves and their offerings before Him. All of this has been a prophetic foreshadowing for believers today. We have taken the time in past articles to learn how each of these instructions is connected to our temples and how we are to minister before Him. Now we’ve come to the most serious of all offerings, the Yom Kippur offering, which comes right after the section about the cleansing of the Lepers. This is no accident. 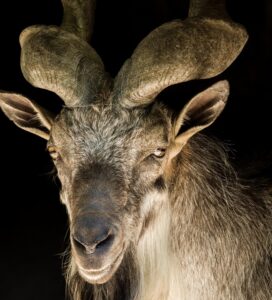 Once Yeshua paid the price and redeemed His leprous Bride who was forced to live outside the camp, He turned to the real culprit behind all this sin: the devil himself. But He did so in a slightly hidden way through this once-a-year atonement offering for all the sins of Israel. Let’s take a look at this offering and unpack its true power and meaning.

First, Aaron takes a bull and offers it for his own sin. It’s the next part of the ritual that garners my attention:

Leviticus 16:7-10 He shall take the two goats and present them before the LORD at the door of the tabernacle of meeting. 8 Then Aaron shall cast lots for the two goats: one lot for the LORD and the other lot for the scapegoat [Azazel]. 9 And Aaron shall bring the goat on which the LORD’s lot fell, and offer it as a sin offering. 10 But the goat on which the lot fell to be the scapegoat [Azazel] shall be presented alive before the LORD, to make atonement upon it, and to let it go as the scapegoat into the wilderness. (Bracketed insertions mine)

In this passage we see the high priest drawing straws, so to speak, for which goat should go to whom. Once the dice were thrown, one goat was going to go to Yahweh and the other would be the scapegoat. Although “scapegoat” is what the NKJV is using here, the original Hebrew is “Azazel.” Azazel is a proper name and is used as such in the Hebrew text as well as in extra-biblical texts. The text literally says “one lot for Yahweh and the other lot for Azazel.”

Before I explain who or what Azazel actually is, let me explain a bit about what’s happening here for those not familiar with this sacrifice. After the high priest makes the bull sacrifice for his own sins, he is now making atonement for all the sins of Israel through this one sacrifice that only happened once per year. The goat that gets chosen for Yahweh is sacrificed to the Lord on the altar and then the blood is sprinkled on the ark of the covenant in the Holy of Holies. The other goat was for Azazel. The high priest would place both his hands on the head of this goat and confess all the sins of Israel upon it. Then it was led out into the desert and left to die in the dry heat of the wilderness. Unfortunately, the goat would follow the person who left it back into camp, symbolically bringing the sins of Israel back upon her! To solve this problem, they eventually took the Azazel goat to a cliff and pushed it off to sudden death.

The symbolic and prophetic overtones of this practice are telling. First of all, as I stated before, Azazel is used as a proper name in the Hebrew Scriptures, and for good reason. Azazel was not just a goat, it was the representative who would bear the sins of all Israel on behalf of Satan himself. According to one particular Dead Sea Scroll (4Q 18, 1:8), Azazel is the leader of the angels in Genesis 6:1-4. These fallen angels, called beney elohim (sons of God), went into the daughters of men and sinned before Yahweh. This sinister act unleashed chaos upon the world, bringing forth the nephilim, those giants that now roam the earth as disembodied demon spirits. The book of Enoch also gives this same description of Azazel and this demonic goat god of the desert (8:1; 9:6; 10:4-8; 13:1; 54:5-6; 55:4; 69:2).

What’s happening in the Yom Kippur sacrifice is quite striking. It would have been enough for the la Yahweh goat to be offered to Him for the forgiveness of the sins of Israel. There is no sacrificial need to have a second goat that is not even offered on the altar. The forgiveness was complete at the first sign of blood from the goat for Yahweh. But because this sacrifice was an all-encompassing full sweep of all the sins of Israel, Yahweh did not want us to just be forgiven, He wanted to make it very clear who He was holding responsible for such sin: Azazel.

The prophetic reasoning behind the Azazel goat being taken into the wilderness is also striking in its meaning. According to Leviticus 17:7, just one chapter away from our original text, Yahweh states, “They shall no more offer their sacrifices to demons, after whom they have played the harlot…” The text actually says “goats” there and not demons. It was later that the writer of Leviticus realized that the goats that were being sacrificed were, in fact, demons and connected to the legendary Azazel. This is important because it not only makes more sense for the LORD to give this instruction right after the Yom Kippur section, but it connects us to the reason why the Azazel goat exists in the first place. The Israelites were susceptible to offering sacrifices to this demonic goat god and his pals, this Pan who was said to live out in the desert.

Yahweh wanted to make it abundantly clear to both His people and to the serpent himself that there were two jurisdictions: one that was inside the camp of Israel that was under the authority and control of Yahweh Himself, and one that was outside the camp that represented nothing but chaos and death. Life was found inside the camp and death was found in the outer realm. The sin of His people was being cast outside the camp into the realm of the one who brought sin into the world, to begin with. Yahweh was symbolically stating that it would be this Azazel that would ultimately be held accountable. Although he would follow Israel and bring her sin back to her many times in many different ways, eventually, that “goat” would be led over the cliff into the lake of fire that has been prepared for him and his angels.

This was the first real poke in the serpent’s chest in a cosmic war that was now in full force. Azazel and his followers will eventually pay for their Genesis 6 sins and the glorious angel of the Garden that was trusted with all of Yahweh’s creation will someday be held accountable for deceiving the first couple. After all, it was this deception that turned the Garden into his desert-dwelling place.

This is exactly why Azazel led Yeshua into the desert for 40 days after He was inaugurated into ministry: to attempt to persuade the Son of God that He could have back the desert regions that were under Azazel’s control if He would just bend the knee. Yeshua was smart enough to know that it was not His Father who was banned from Azazel’s region, but Satan banned from His. Because Yahweh chose to allow Satan to rule those regions unimpeded, Satan began to believe they were his. Little did he know that Yahweh had already initiated a plan to take back those regions under his influence and turn the desert back into the Garden of Eden it was meant to be. Those nations would have the opportunity to be redeemed once His Bride was brought back into His house. And that Azazel of old would be pushed off the proverbial cliff from which he tempted Yeshua.

These “goats” they were sacrificing to were none other than the fallen sons of God that were under the leadership of Azazel (the infamous Pan of later mythology). These also became the “gods” of Greek mythology. It was these “gods” (elohim in the Hebrew) that were cast down like lightning to the earth and forced to dwell in the “dry places” (Mt. 12:43) which became associated as the desert, the place of no water or life

All those inside the camp of Israel are of the sheep and all those not inside are goats. They are connected to the goats that fell from grace who now roam the desert and whose end is destruction. Whether they know it or not, all those who choose to live outside the camp of Yahweh are choosing to join the army of Azazel in the desert. This is why Mathew 25:32 says that at His coming He will divide the sheep from the goats. Those who are His will be placed in His right hand, led by the General Yeshua while those who have sided with Azazel will go on His left hand.

This is another way of saying that the battle lines will be drawn and the ancient cosmic war between the fallen sons of God and their Maker will commence with Yahweh and His army against Azazel and his. Only one side will remain as those fallen sons of God who ruled the heavenlies are superseded by the very mortal men they aspired to rule over after the fall.

The irony is both commanding and substantial. Through the blood of the second Adam, the mere mortal sons of Adam will be elevated to a position higher than the angels: that lofty position of beney elohim, sons of God. There can be no greater humiliation than for the fallen sons of God, those elders, and council of the Most High Elohim who were there at creation, to be replaced by the very ones they sought to rule over.

It will be at that point that all of Creation will rejoice as the fallen ones are permanently destroyed and the new council of Yahweh takes its rightful place to rule and reign for a thousand years. Ladies and gentlemen, if you are a follower of General Yeshua, that’s you. Get ready. The war has already begun. There’s a reason why Paul says that we do not fight against flesh and blood. It’s a heavenly war with a demonic agenda to keep us from taking their place!

To be continued in a full-fledged book…