The story of Noah is one of the most popular stories of all time and is littered with one lesson after another. It is from this section of scripture in Genesis 6-9 that the gospel is foreshadowed, baptism is pictured for us, and we see death, new life, the coming nation of Israel, the New Covenant, and much more. The entire world was changed due to this catastrophic global event. This article will focus on the validity of the flood. It is by no means an exhaustive study, but is meant to be a quick overview of its reality and impact on all mankind. 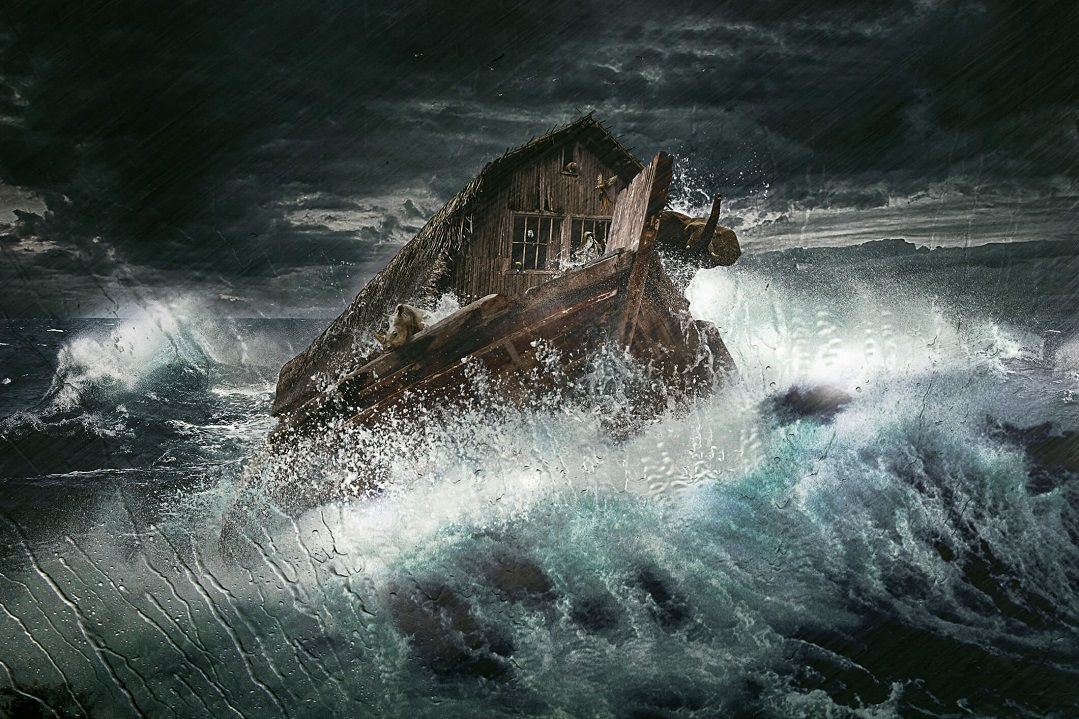 First of all, let’s start with the science of it all. Have you ever wondered how on earth someone like Methuselah could live to be 969 years old, or Noah to 950, and how only the best of those living today barely break 100? The answer is simple. Noah’s flood. The earth is currently tilted at 23.5 degrees and is still in a slight wobble, telling us that something large hit it in the past and knocked it off its axis. If Yahweh created the earth at a perfect 0° angle, then there would be virtually no seasons and the entire earth would feel more like the area around the equator. Also, at that time, the bible says that there were seven atmospheres. Today there are only six. Many scientists believe that that seventh atmosphere was some sort of a moisture layer, perhaps colloidal ice suspended above the earth. If this is accurate, then that seventh layer would have blocked out virtually all UV light and the deadly radiation that causes all of creation to age more quickly. This added layer would have almost doubled the atmospheric pressure on the earth causing the blood of all living things to have extreme levels of oxygen. Scientists say these elevated levels could allow a human to run 200 miles nonstop with ease and would explain how a Tyrannosaurus Rex could breathe with such small nostril capacity. At today’s oxygen levels, a T-Rex would never be able to get enough oxygen through his nasal cavity to be able to breathe. This higher oxygen level coupled with the doubling of atmospheric pressure as well as other components would have allowed everything on earth to grow larger, even to Jurassic levels, and would have allowed the humans who were created then to live forever. After the flood, we immediately see ages cut in half, and they continue to fall rapidly to where they are today due to the radical change in atmosphere and radiation exposures.

Putting all this together, one of the most prevalent theories out there is that there was a giant comet that broke through the suspended ice canopy, collapsing it and causing it to rain everywhere for the first time. The comet hit the earth with such force that it knocked it to its current axis and cracked the ground open, forcing the waters of the deep to shoot 20 miles into the atmosphere, adding to the drenching rain. The extra water on the surface of the earth created such weight over the thin parts of the crust that they collapsed five months in. The bible records that it was 150 days before the water of Noah’s flood decreased and the water that had been supporting the crust from underneath was now on top. This collapse was what created the oceanic basins we see today.

The immediate formation of these large bowls would have sucked the water into them at such a high rate that we would have seen signs of water erosion at extreme levels all over the world. And that is, in fact, what happened. The Grand Canyon was not formed over millions of years. With as much water as was running through the deserts it would have been formed in a matter of weeks. The Bad Lands, which was clearly formed by water, would have been formed in the same time period. The extreme water levels would explain virtually every natural phenomenon on earth. They say stalactites and stalagmites take thousands or millions of years to create, but that’s based on current drip rates of calcium and mineral deposits. If there were thousands of feet of water over the earth, not only would the caverns themselves have been carved out in a short period of time, but the water pressure on the surface would have forced minerals through the earth and into the caverns at a much higher rate, creating incredible rock formations in less than a hundred years. We know for sure that this is possible as there has been documented evidence of large stalactites found in old basements of buildings less than a hundred years old.

Not only would the flood explain just about everything we find on this earth, it would also explain why we have such massive oil deposits in the Gulf of Mexico. The receding water would have caused all of this dead organic material to be floating around in massive quantities. It would have settled at one time into expansive piles and then all the mud and silt that was carved out of the land would have piled on top of it and created the necessary pressure to create some of the oil deposits we see today.

The evidence for a worldwide flood is so overwhelming it’s almost incredible that there are any people who deny it. Whether it be the fact that the oldest desert on earth just so happens to be about 4400 years old, the fact that there are fully fossilized trees that have been found going through almost all the rock strata due to the fact that they were buried alive, or the fact that almost every single culture and people group on every continent has a legend of a flood, the flood of 4400 years ago shows its mark no matter where you turn on this globe. Even NASA has satellite pictures of the ark that is still resting on Mt. Ararat.

The truth of this global catastrophe is that it was not only a real historical marker that changed the course of the earth, it is also THE black eye on the theory of evolution. Evolution demands millions and millions of years for things to be created and evolve. And if there was a global flood that destroyed everything and what we see today is only about 4400 years old, that lets the air out of that drastically over-inflated balloon.

At the end of the day, Noah’s flood teaches us many lessons, but one major one: God has a standard of living that He requires all flesh to submit to. That standard of living brings blessings and curses: blessings if one keeps it and curses if one does not. In the days of Noah, the people of the earth were breaking God’s instructions and were living self-centered lives focused only on themselves and what pleased them. On the other hand, Noah “pleased God” by doing what pleased Him, and God chose to save him and his family because of it. There can be no wonder, then, why the apostle John said in 1 John 2:3, “Now by this we know that we know Him, if we keep His commandments. He who says, ‘I know Him,’ and does not keep His commandments is a liar and the truth is not in him.” And then in chapter 5, verses 2-3 say, “By this we know that we love the children of God, when we love God and keep His commandments. For this is the love of God, that we keep His commandments and His commandments are not burdensome.” Noah understood the same thing that John did: loving God was connected to obeying Him. James said it this way: “Show me your faith without your works, and I will show you my faith by my works” (James 2:18). Just like human relationships, loving God is and always has been a lifestyle of proving our love by what we do.

Unfortunately, because we humans do not learn from our past mistakes, the bible says in Mathew 24 that God will once again judge the earth just like he did in the days of Noah. Except this time it will not be by water, but by fire. It says that the Son of Man will come upon all mankind as suddenly as the flood did. People will be eating and drinking and carrying on and only those who are walking in the Light will see Him coming. For those who are walking in darkness, it will be as a thief in the night (1 Thes. 5). So let us walk as children of the Light! Know His word, keep His commandments, and seek to know Him more and He promises to flood you with the water of His Word which washes away all sin and leaves you a brand new creation!

The Position of the Creator and the Creature

How to Stop the Pain Now!