My name is Chadwin Burke. This is how I finally committed myself to Jesus Christ. It was a long road of pure wickedness before I found Him. Here is my story:

My dad was in prison most of my life, so I lived with my mother most of my life. I hated my dad because of this. We moved around a lot depending on who she was dating. Whey they would split, we would pack up and move again. My mother worked a lot and I was home alone a lot. As I was walking home from school one day, my friends ask me if I wanted to come over and play games and smoke some weed with them, so I went with them. I was 10 years old. I had a blast. I didn’t really get into the getting high thing, but I realized I could make good money by selling it. So I saved all my Christmas money and lunch money and started selling drugs before I was even in sixth grade.

When I was 13, we moved to Detroit and my mom ended up finding my stash of cocaine and weed and my book bag filled with money. She surprisingly wasn’t all that mad. She made me pay some bills with it and for the first time we had cable in our house. After that, my mom got hooked on methadone painkillers, stole my drug money, and took off with her boyfriend for almost a month. I found out that she was a heroin addict, and I was very angry at her boyfriend for getting her into it. So I bought a gun, found out where she was, and went over there and robbed him and his buddies and brought her home. I immediately was hooked on robbing dope dealers for the quick money I could make, not realizing the enemies I was making at the same time. 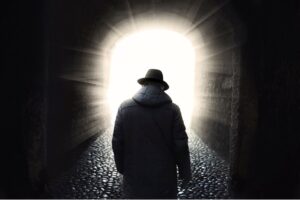 I never left the house without a gun. I had been shot a half dozen times and got hit once in the leg by a bullet that passed through a nearby car. I had to pull the bullet out with tweezers and then I closed the wound with super glue to keep from having to go to the hospital and deal with the police. I was constantly in and out of jail and running either from the cops or other gang members. When I got out of jail this last time, I and this girl got high on coke and she left her boyfriend, who was also in jail, for me. The next thing I knew she was pregnant with my son. He was born one month before I had to self-surrender for this federal case. I got a 36-month sentence. After 10 months in other places, I ended up here at Marion Camp. This is where my whole world was turned upside down…or should I now say, “right-side up.”

I was wandering around with my headphones on and a man named James Staley was sitting and talking to a friend of mine. They called him “Preacher.” I found out why that day. We started out talking about my tattoos and my life and stuff. Then he started telling me stuff about my life that he could not have possibly known and he was dead on. That got my attention but at the same time, I thought he was crazy, and I didn’t want to talk to him anymore. But I couldn’t leave. Something kept me there listening. He said, “Aren’t you tired of feeling lost and going through all the stuff you have gone through?” I was all ears as I was definitely tired of my life in every way. He said he had a solution and told me that God could give me a brand-new life and save me from all my mess. At that moment, another guy named Dogit came by and stood there for a minute wanting to know what we were talking about, and asked me what was going on. I told him, “We are having church man. I don’t believe in going to church, but this is a real church. Wanna join us?” Dogit put his tail between his legs and quickly made up some excuse and took off.

After that, Preacher asked me if I was ready for a new life, and I told him “most definitely.” So, he told me to follow him into the chapel so we could take care of this right now. So, I did. In the chapel at Marion prison camp, my life changed forever. I was scared. We began to pray. I immediately got all hot and sweaty and very angry. I heard voices in my head and had feelings of wanting to hurt Preacher really bad. Out of nowhere, I wanted to choke him. It took all my strength to not lunge toward him while he was praying. Then out of nowhere, as if he could feel the war inside of me, he reached out and put his hand on my shoulder when my emotions were at their strongest and immediately the anger stopped, and I started to cry. Afterward, he told me that he heard the Holy Spirit tell him to put his hand on my shoulder. It was like I lost control and someone else started driving. It was SO REAL. I’ve never felt anything that real. When James finished it was like the feeling I had when my son was born. I finally have a purpose.

Ever since then I see Preacher almost every day for Bible study. This man saved me through Christ, and I still can’t express my gratitude for it. I don’t feel lost anymore. Not angry either. And my anxiety and paranoia from my life are even gone. Yes, I still slip up and the life I used to live creeps back sometimes, but it doesn’t have the power on me as God does now. I’m forever grateful for the Lord’s love in my heart and the patience He has for me. He waited 28 years for me and Amen to that! I pray for Him to help guide me and to speak to me. Recently two of my friends in their early 20s died from heroin use. It really tore me up and I prayed for help and for peace. God gave me just that and helped me not be lost in mourning for my friends. I simply was at peace with it and was grateful beyond everything that I was no longer going down that road and am no longer a slave to the devil’s lies. I serve a new God now and I’ve learned His name is Yahweh and His Son is Yeshua, which I learned means salvation. And that is exactly what He did for me. He saved me. Now I’m learning how to give my life up so that He can live through me. Coming to prison this time saved my life…forever.

Please pray for me to keep growing and learning about Him. Pray for my bad nicotine habit, my cursing and that I would be changed more every day. Also, if you could pray for my son and his mother to get saved, I would really appreciate it. She doesn’t believe in much.

Friends, the angels rejoice when a single soul is saved from the kingdom of death into the Kingdom of Light. If this entire situation has happened to me just for this one young man, it will all be worth it. The Spirit is radically transforming him a little bit at a time each day. He is now catching himself when he curses and walks with so much more peace. The Father has used him in my life more than he will ever know. I am not a very patient person to begin with and Chad is about the complete opposite of me. He is extremely laid back and comes from the video game generation. Unfortunately, that means he is not very disciplined and many times I have to go wake him up for our daily Bible study! LOL. I am not used to working with people that are like this. 😉 But the Father specifically told me not to give up on him and to love him and be patient. The Lord made it clear that if I would just hang in there and remember that he is a newborn in Christ, and just feed him as I can, the Spirit would do the rest. And that is exactly what I am seeing. The Father has given me a great love for this young man, and I am grateful to be a part of his life. Sometimes I think we expect people to act or respond a certain way and we don’t really give the Spirit the time to really do the work at HIS pace!

Sometimes we don’t know why things that appear to be bad happen to us. The pain that we are experiencing can blind us from the pain that others are feeling all around us. But when we start to look past our pain and look to help others in the midst of our own, we somehow don’t feel our own pain nearly as much. And that is exactly what I am experiencing here. People are hurting here too, and they need the love of Yeshua just like everyone else, and sometimes more. Thank you all for your prayers during this time. Although we see through the glass dimly at times, something tells me that by the end of this journey that I am on right now, it all will become very clear why everything had to happen the way it did.

If you would like to write Chad and welcome him into the Kingdom and encourage him, please do so. Getting mail around here is the highlight of most of our days. Please send cards or letters to: