It’s hard to believe, but I just had my third Hanukkah in prison. It was bittersweet. Sweet from the perspective that it definitely felt more like Hanukkah thanks to the nice silver menorah they gave us (we had a junky wooden one last year) and the two feast days we had with great times of fellowship and Bible study. But it was bitter because I couldn’t get away from the deep feelings of wanting to be home teaching my children instead. But that day will come sooner than later. The Messiah will light the hearts of the eight members of my family and no one will ever quash them again. Until then, I’m going to continue to be the best light in this dark place that I can. 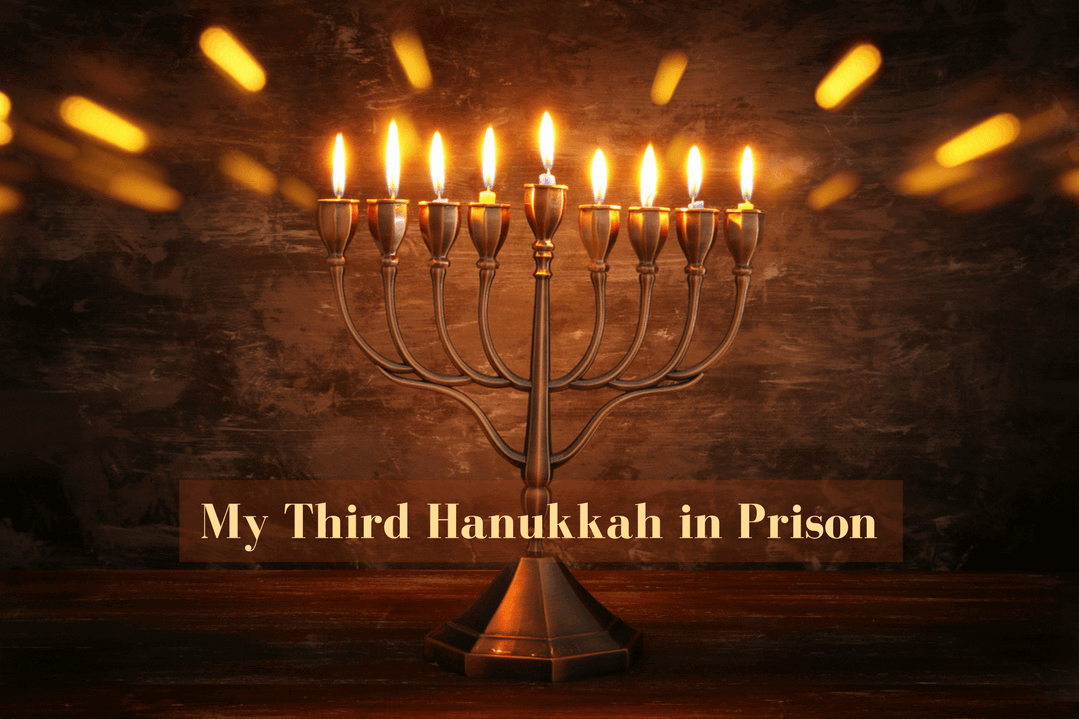 We started the Festival of Lights this year with a feast. We had homemade prison pizza, apple and pumpkin pie that the prison guards gave us (leftovers from one of their parties), and a bunch of other finger foods. We all had a great time as I taught the original story of Hanukkah and how it relates to us as believers today. From there, I symbolically tied each candle to a person in Scripture and each day allowed the significance of that person to light the way of the Covenant from Genesis to Revelation.
On day one we learned that the light that was created on the first day was the “Word,” the light of Messiah. It was this light that was the “light of the world” before the sun was created on day four. We talked about the meaning of light in Hebrew and how fire and the presence of Yahweh are both intimately connected to it. We made the connection that Adam was the first one to receive the Covenant and that when he blew it, the presence (fire) of God was revealed through the flaming swords of fire that the guardian angel had to protect the Tree of Life.
For day two we talked about how the Covenant was passed down to Noah, connected the eight days of Hanukkah to the eight people on board the ark, and revealed that Noah was chosen because he was a righteous man who kept the commandments of God. I pointed out that he had to truly overcome to do so and to keep his family alive.
Day three represented Abraham and how Yahweh decided to renew His Covenant with mankind by choosing only one nation this time instead of all seventy, the nation of Israel. We talked about how he was asked to sacrifice his only son in order to qualify as leader of Israel and made the parallel to Yeshua. We spent some time talking about how Yahweh always tests us before He promotes us and it’s how we handle those tests that determine our promotion. Like Abraham, we, too, must overcome.
On day four, we allowed Abraham to pass the torch to Joseph who showed us how to overcome his trials after the Lord put him in a well and in prison. Yahweh did this to kill his pride and fully train him to be the leader of all of Egypt. His obedience and trials led to the protection and blessing of all of Israel for the next 400 years!
Day five brought us Moses at the burning bush. We learned that the voice in the “bush” was actually the Angel of Yahweh, also known as Yeshua (the Word before made flesh). We then went over to Joshua 9 and discovered that the king of the trees (people) was the Bramble tree. From there we went back to Exodus and discovered that the burning bush was not a bush at all, but was actually the Bramble tree, which was also the tree that was used to make Messiah’s crown of thorns. We learned that the reason the Bramble tree of Joshua 9 said that anyone that calls Him king must find shade under His branches is because the Bramble tree has branches that almost touch the ground. The only way to actually get under His branches is to get on your hands and knees and prostrate yourself before the King! Moses was actually standing before the King of the “trees,” who was, in reality, the fire of God, the very Angel of Yahweh that would be leading them through the desert! No wonder He told Moses to take off His sandals because he was standing in the throne room of the King!
Day six was symbolic of King David. We spent time talking about David’s failures and successes, how he was a man after God’s own heart and that his life was the light of the Word, meditating on it day and night. He knew when to give grace, when to judge, and how to give glory in all situations.
From there we came to the seventh candle, the candle that represents Yeshua incarnate, the Light of day one. The one Light of the world that lit the earth until day four had now become the Light of the world again in the flesh, teaching His disciples how to return to day one. Then we saw how Messiah will once again be the Light of the world when there will be no need for the sun on the “eighth day” of creation after the millennial reign.
We ended on day eight, which we made symbolic of us, His disciples, who are also called to carry on the Covenant by being a light to others in this dark world. We follow in His footsteps to complete the cycle of the light of the Covenant. We had a great time and the guys learned a lot along the way. I’m grateful for this time as it has taught me to really enjoy one-on-one time and to love people where they’re at. After all, the Father was patient with me when I didn’t understand or know anything and struggled with my flesh.
So be a light this season, my friends. Don’t worry about pointing out the darkness. Just be a light.
Shalom!
Jim
December 2017