Leadership With A Different Spirit

One of the most significant issues the community of God can face today is its members relinquishing their God-given responsibilities and trying to put authority or obligations of ministry and leadership on a single person or small group of people. Originally every firstborn of Israel was to be part of YHWH’s priesthood, with the whole nation representing Him to the world (Exodus 13:2, Exodus 19:6). Still, because of the sin of the Golden Calf, the consecrated duties were given to the tribe of Levi alone for their faithfulness. The Levitical priesthood was only temporary; Yeshua now serves as our High Priest in the heavenly tabernacle (Hebrews 4:14-16). So if we accept that we are a kingdom of royal priests (Isaiah 61:6, 1 Peter 2:9, Revelation 1:6), then we must also acknowledge that the responsibilities of the priesthood are ours and that our ‘great commission’ is very much that, a CO-mission with Messiah, working as his apostles to bring the Gospel to the people of the world and leading them to God (Matthew 28:18-20).

Of all the convoluted and complex civil legal systems in the world, the Torah of El Shaddai is radically different in that it can be understood by anyone, not just specialist legal professionals, due to the importance of the nation remaining in a state that allowed God to dwell with them, understanding why it’s necessary and how to achieve it. It is supposed to inspire self-governance, a moral and ethical obligation to maintain a peaceful and godly community resting on the shoulders of everyone who calls themselves a part of Israel. After all, Israel was never supposed to have any king but El Elyon, God Most-High Himself (1 Samuel 8:7), and there were no commandments implementing police to enforce the Law in the communities. The judges and leaders were in place to judge between matters that could not be resolved between the people involved (Exodus 18:19-22, Deuteronomy 1:15-17), not to act as overseers. It’s not just the job of Moses, the Levites or even Yeshua to share, teach and demonstrate these principles anymore. Everyone is to be part of that priesthood carrying the name of God to others, each one of us a leader guiding and explaining to others what it means to be obedient to the very source of life itself. However, we need to recognize what it means to lead and walk this path with faith and not fear if we are to truly shine the light of God into the darkness and bear the good fruits of righteousness (Daniel 12:3, Matthew 5:16, Matthew13:43). 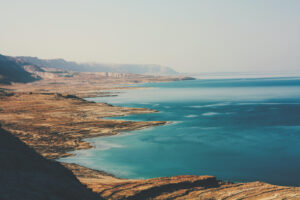 When the twelve spies sent into the Promised Land returned to the camp in the wilderness, their role was to inspire the people to be ready to take what had been promised to them, sharing news of the abundance and fertility of the land (Numbers 13:1-25). Instead, ten of these men, leaders within their tribes no less, inspired fear of the Canaanite giants. Victory over the land giants would not have been promised if it had not been a certainty, so instilling anxiety in the people over something God guaranteed was incredibly destructive (Numbers 13:26-33). Only Joshua and Caleb stood against the evil report, with an attitude of trust and faith in the word of God to inspire and strengthen the courage of their people (Numbers 13:30, Numbers 14:5-9). It is no coincidence that these two men would be the only ones of their generation to lead Israel across the Jordan into the Promised Land. Just as when you are riding a bike, there is a natural tendency to turn towards the direction you are looking at, so to see only potential defeat and loss is because you are looking in the order without God and His promises. Teshuva, turn back to God, facing in His direction, and you will see only success and blessing ahead of you.

Before the expedition, Joshua was called Hosea (Strong’s H1954), meaning ‘salvation.’ Still, Moses changed his name, adding a Yod to the beginning (Numbers 13:16). The addition of a Yod added the sound ‘Yah’ to the name, in other words, the short version of God’s name, converting the name to Yahoshua and now meaning ‘Yah is salvation’ (Strong’s H3091). YHWH would be their salvation, but Joshua would be the one that represented Him at their head as the nation crossed into Canaan. Interestingly, Yahoshua is also the full Hebrew version of Yeshua’s name, Yeshua itself being the Aramaic form. Caleb, whose name means ‘dog’ and suggests the characteristic of loyalty (Strong’s H3612), also clearly demonstrated to the people that he believed God to be bigger than any obstacle in their way and so was declared as having a ‘different spirit’ to those around him. For those who claim to have the Holy Spirit, it is essential to exemplify that ‘different spirit’ like Caleb, that attitude of faith-based optimism that allows the blessings of God to tangibly manifest in our lives and sets us apart from the perspectives of the world (Galatians 5:16-24, 1 Thessalonians 1:4-7).

However, the pessimism of the people whose complaints drowned out Joshua and Caleb’s words of faith only served to undo all that had been done for the nation up to that point, leading the people into what was to be a devastating turn of events. For their lack of trust in God’s will, the nation was to be tested, wandering the wilderness for forty years until only Joshua and Caleb remained of that faithless generation (Numbers 14:27-35). This time was not just a period of punitive punishment and exile, however, but an opportunity for those who would not cross the Jordan to ensure that their children would at least possess faith and trust in God, as well as exemplary character and attitude to be worthy of inheriting a place in the land. It was a time for redemption and atonement, a time for the Torah to be deeply instilled into the hearts of the second generation, a time to experience what it means to dwell in the presence of the LORD and so to understand the importance of trusting in the One who provides for all needs (Matthew 6:25-34, Philippians 4:19). That faithful generation would be ready and willing to claim back for God what was rightfully His before they even stepped foot in the Jordan river.

This period in the wilderness was an opportunity for the children of Israel, and especially those leading them, to demonstrate that they had more faith than fear, that their trust was in YHWH and His promises, and so would teach their people with examples of righteousness and purity drawn straight from the Word of God. The fear of the LORD, based on love, faith, and trust, is a powerful agent against the terror and anxiety-based fear felt when facing threats, enemies, or battles (Psalm 34:7, Psalm 85:9, Psalm 128:1-4, Proverbs 10:27, Proverbs 14:26-27, etc.). Whereas the fear of faithlessness cripples and depresses us, causing a crisis of belief and defeating us before we even meet our trials, the fear of God lifts us above these threats, humbling us so that we allow God to go before us to prepare the way to victory, unlike the disastrous, panicked and ultimately fatal attempt to take the land by some of the men when hearing YHWH’s declaration against their generation (Numbers 14:40-45). We must ALWAYS allow God to go before us to prepare the way and lead us into that certain victory, knowing that ALL things, whether seemingly ‘good’ or ‘bad’ in themselves, work together for our good (Romans 8:28)

It has always been God’s plan to partner with His people in a two-way relationship (Exodus 19:5-6, 1 Corinthians 3:9). Although our Father is going before us that guarantees success, we should not expect Him to do so everything for us. The Israelites still had to spy out the land to discover the nature of the giants they would face and develop appropriate tactics against them, just as we must look within ourselves to see what is obstructing our way, but knowing that with God, they have already been defeated. The Israelites still had to go into battle with the inhabitants of Canaan, just as we must put in the work to face and resolve our giants and seek atonement. Still, it was the fact that God was before them, paving the way, and with them in the fight, that ensured their victory over their enemies.

We must all see the responsibilities of godly leadership as our own and not just somebody else’s because we have been commissioned to take the Gospel as a light into the darkness. We cannot expect to lead anyone out of that darkness if we are not exhibiting the qualities of a faithful and godly leader or if we lack the faith in the Word of the One we are supposed to be pointing them to, which would be like blinding ourselves before then trying to lead the blind. Showing others a lack of faith in God or not trusting in His Word is dangerously close to ‘taking God’s Name in vain’ (Exodus 20:7), misrepresenting Him as being fickle in granting that which He has promised to His people, which is most definitely NOT the case.

We must be those ‘houses’ built on the bedrock of the Messiah’s work and teaching (Matthew 7:24-27), standing on the firm foundation of God’s Word and with unwavering trust in His promises so that nothing can obstruct our path to the Kingdom or sully the good fruits we can demonstrate in our lives. Only with this strength of conviction and the obedience that naturally goes with it will we be worthy of that privileged role of guiding and leading others back to our Father in heaven. Only by showing the fruits of that ‘different spirit’ and taking responsibility for the light that we shine into the darkness will we show the world the glory and power of YHWH through our lives. Only by having the faith that our giants are already defeated by the hand of God will we show that we are worthy of a place in God’s Kingdom and a part of His great and holy nation.